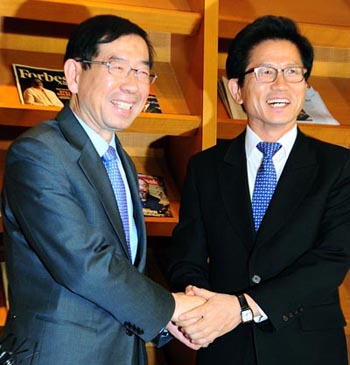 Seoul Mayor Park Won-soon had his first meeting with Gyeonggi Governor Kim Moon-soo yesterday and agreed to launch a joint cooperation committee, although they failed to make a final decision on raising public transportation fares.

Upon meeting, Park and Kim recalled their special relationship in the 1980s when Kim was arrested on charges of staging an illegal labor rally as a leader of the Seoul Labor Unions’ Association and Park, who was a civil rights lawyer at the time, defended Kim at his trial.

Park, a nonparty-affiliated human rights lawyer-turned-politician, was elected mayor of Seoul in a by-election Oct. 26 with the full support of liberal political forces. Kim was re-elected Gyeonggi governor in local elections in June 2010 on the ticket of the ruling Grand National Party.

But the two former activists disagreed over hikes in public transport fares for buses and subway trains running between Seoul and Gyeonggi, which is an urgent issue for debt-ridden Incheon and Gyeonggi.

“Raising bus fares was already decided by authorities in Seoul, Incheon and Gyeonggi, before you, Mr. Mayor, took office,” Kim told Park. “It would be better to integrate the fare system in the three regions so citizens won’t be confused.”

Kim added: “Some 50 to 60 percent of complaints from citizens in Gyeonggi are about traffic congestion. All routes leading to Seoul are always jammed.”

Park was noncommittal. “Although the Gyeonggi government made the decision, the Seoul city government is still reviewing it,” he said. “As Gyeonggi and Seoul share the same destiny in various issues, we still need a communication channel to build cooperation with each other.”

The debt-stricken Gyeonggi and Incheon governments have desperately tried to raise public transportation charges, but former Seoul Mayor Oh Se-hoon had rigidly refused since he raised bus fares from 800 won ($0.70) to 900 won in April 2007. Traffic authorities in the three regions made a decision in September when the Seoul mayor post was vacant.