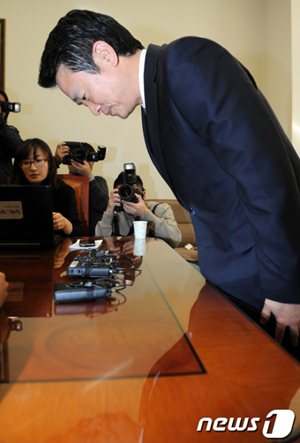 The chairman of the parliamentary committee on foreign affairs, trade and unification offered to resign yesterday, two days after his party forced through a free trade agreement with the United States amid tear gas and physical scuffles.

Rep. Nam Kyung-pil of the ruling Grand National Party came under attack after his efforts to pass the trade pact in bipartisan agreement ended in failure, with Tuesday’s vote held in chaos.

“As the South Korea-U.S. FTA was ratified, I will step down from the trade committee chairman today,” said Nam, a member of his party’s top decision-making body.

The four-term lawmaker and 21 other GNP lawmakers had vowed to give up their candidacies in the next general election if the long-pending trade pact was passed accompanied by physical clashes.