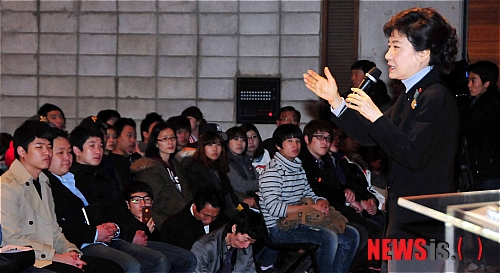 Ahead of the next year’s presidential election and following the meteoric rise of liberal independent Ahn Cheol-soo, Representative Park Geun-hye, former Grand National Party chairwoman and a daughter of former President Park Chung Hee, has ramped up efforts to better communicate with the nation’s younger generation and shed the image of being a traditional politician.

Park, the 59-year-old three-term lawmaker representing Daegu, held a series of meetings with university students this week. She visited Induk University in Nowon-gu, Seoul, on Monday and met with members of a student entrepreneurship club. She gave two rare lectures at Hannam University and Daejeon University in Daejeon on Wednesday. Park’s last lecture before university students was given in 2007 during her GNP presidential primary against Lee Myung-bak.

Although there is more than a year before next year’s presidential election, the GNP’s defeat in the October Seoul mayoral by-election against independent candidate Park Won-soon has triggered Park Geun-hye’s efforts to better communicate with young voters.

Park’s events with university students also appeared to be a counter to the “Youth Concerts,” or lectures, given by Ahn, software mogul and dean of the Seoul National University’s Graduate School of Convergence Science and Technology. The Youth Concerts made Ahn popular with the younger generation.

Meeting with students Wednesday, Park tried to redefine her image of “icy political princess” by candidly discussing current affairs with the students. Park is known for her reserved attitude, and she rarely expresses her opinions to the public, unlike most politicians. Her talks in Daejeon, however, covered a wide range of topics from politics to falling in love.

Before the lecture, hosted by the student associations of the private universities in Daejeon, Park also had a casual chat with student representatives and didn’t hesitate to level some harsh criticisms at her own party. Voters in their 20s, 30s and 40s turned away from the Grand National Party in the Seoul mayoral by-election in October, she said, because the ruling party “deserved punishment for its many shortcomings.”

“We are repenting immensely,” she said.

“The youngsters’ pain became their parents’ pain and eventually the entire people turned away,” Park said. “We had many shortcomings in communication. Communication is all about showing interest, but we didn’t try enough to listen to what the complaints are.”

She also said the government’s current plan to reduce college tuitions is insufficient, calling it “unconvincing to the students.” She also said a near-zero interest rate should be applied to financial aid programs.

“Politics equals policies,” Park said. “When they are reflected in the budget and the people can feel the effects, then it is has been delivered to the public.”

Analysts think Park is now trying to refine her image by distancing herself from President Lee Myung-bak.

“It is important to differentiate her policies from that of the Lee administration,” said GNP Representative Choi Kyung-hwan, a Park loyalist, yesterday. “The current government managed to overcome the global economic crisis, but failed to narrow the wealth gap and ease hardships for the vulnerable class during the process. Therefore, it is crucial for the next administration to think about what to do to resolve those problems.”

Representative Kim Young-woo, a Lee Myung-bak loyalist, said Park’s remarks were not attacks on the Blue House. “I think it was more about the people’s distrust of the GNP, the government and politics, in the wake of the Ahn Cheol-soo phenomenon,” he said. “It appeared to be more about the ruling party’s responsibility for the current situation. I didn’t think it was a move to keep a distance from the Blue House.”

During the lecture at Hannam University, she addressed an audience of about 500 students and journalists and gave a presentation of photos that have had special meanings in her life, including some from her student years. Park spoke for 30 minutes in the uncharacteristically emotional presentation, and gave another hour to answer students’ questions.

Asked if she really likes politics, Park said, “My father was a politician and my mother supported him, but I was not really envious. You could feel productive, but there was no freedom. But when the country faced the IMF crisis [the Asian foreign exchange crisis in the late 1990s], I felt a sense of duty and I thought that this country, built on so much blood and sweat, should not be left to collapse.”

Asked if she had ever been in love, Park, who is single, said, “Of course, I have. I wouldn’t be human if I hadn’t.”

During the lecture, some students showed affection for Park, calling her “elder sister.”

Others asked sharp questions about the GNP’s use of its majority to ram through the Korea-U.S. free trade agreement ratification on Tuesday.

“I feel very sorry for the way the FTA was ratified,” Park said. “It will be great if the ruling and opposition parties can agree, but it will take a long time for such a tradition to take root.”

Outside the auditorium, dozens of students held a protest to demand her to leave, calling her “a traitor.”

Prime Minister Kim Hwang-sik yesterday also held a meeting with 100 students of Gachon University, borrowing the format of Ahn’s Youth Concerts, to discuss current affairs, from the FTA ratification to expensive tuitions. Asked if he was willing to give up a part of his wealth as Ahn has promised, Kim said, “We should applaud Ahn for his contribution to the society. I will join the move.”

The event was broadcasted live through social network services including Twitter. An official from the Prime Minister’s Office said more unconventional events will take place in the future.