Scrap over studio apartments in Nonhyeon-dong

Scrap over studio apartments in Nonhyeon-dong 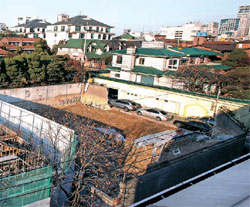 Wealthy residents of one of Seoul’s most expensive areas are angry that one of their neighbors wants to convert his home into a studio-apartment building, the kind of lodging popular with young renters of modest means.

According to the Gangnam District Office, a group of residents in Nonhyeon-dong in Gangnam, southern Seoul, have submitted petitions asking for the cancellation of a permit to allow the redevelopment of a two-storey house into a four-storey apartment building. They say their privacy will be invaded by strangers and “uncontrollable people.”

Nonhyeong-dong is a street known for its high priced real estate and VIP residents, especially houses with addresses beginning with the number 29. President Lee Myung-bak owns a house in 29-0; Kim Yong-ju, chairman of Haengnam Chinaware Inc., is living at 29-15; and Choi Soo-boo, chairman of Kwang Dong Pharmaceutical Corp., is living at 29-10.

The brouhaha started Oct. 11 when a resident surnamed Nam, 55, who lives at 29-7, received approval to convert his two-story house into a studio apartment building with 19 units. Since then, about 20 residents have submitted petitions for the permit to be rescinded. 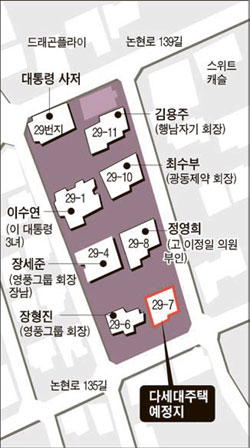 The Gangnam office has arranged three rounds of negotiations between Nam and his neighbors, who insist that he keep the house at two storeys and reduce the number of apartments to five. Nam countered with an offer to rebuild at three storeys, but said his neighbors must agree not to rebuild their houses any higher. Most neighbors agreed but one neighbor is sticking to the original demand.

“We’ll try to resolve the differences among the residents as soon as possible,” Park Hyo-seok, an official of the Gangnam office, told the JoongAng Ilbo.