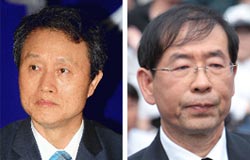 The relationship between the Ministry of Land, Transport and Maritime Affairs and the Seoul Metropolitan Government is becoming more bitter than ever as the land minister openly criticized the city’s handling of its housing policies yesterday. Kwon Do-yup made an unusual visit to the press room at the government complex building in Gwacheon, Gyeonggi, and told reporters that “the housing policy of [new mayor] Park Won-soon is far from being friendly to working class families.”

He said the policy threatened to “eventually lead Seoul citizens to leave the city.”

This is the first time that the minister has spoken out about the city’s housing redevelopment plans.

“I cannot help but express my deepest concerns over the mayor’s housing reconstruction policy for Seoul,” Kwon said. “It is important to institute policies that make the city a comfortable and attractive place to live in, but before that, it is important to create an environment that helps working-class people [by supplying enough houses].”

According to the minister, Seoul’s population is around 10 million and in order to accommodate its inhabitants, the city needs at least 5 million housing units. But as of last year, the number in the capital stood at a mere 3.4 million.

Kwon said a long-term housing policy plan was required for the city to increase the number of homes for middle- to low-income earners.

“Despite the fact that there is not enough housing, the new mayor is aggressively trying to expand the number and size of green areas in the city,” Kwon said.

“He is also restricting the height to which buildings can be constructed to protect people’s views of Seoul’s landscape, which will eventually cause a fall in the number of available housing units [due to the higher growth rate of the city’s population ].

“Citizens with less purchasing power will be forced to leave the city [as they fail to find residences],” he said, adding that any policy which puts the landscape first cannot be considered friendly to working-class people. 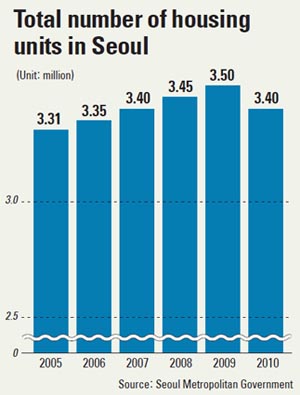 As such, speculation has mounted that the city is intentionally regulating the speed of housing reconstruction projects as part of a populist move ahead of the legislative and presidential elections next year. The project would force out the current tenants and owners unless they were able to afford the higher prices of the replacement properties.

But municipal authorities denied such talk and released a statement citing weaker economic conditions for the cooling off of the project, as well as the stagnant condition of the construction industry, which is seeing lower profits.

Kwon expressed concern at the city’s move to chase projects that appeal to the public but which do not tackle less popular yet pressing needs.

“It seems the city is focusing too much on policies that promote public projects [such as building more parks and welfare centers], which makes me concerned,” he said. “The city should really think about what is needed right now for the people living in Seoul [such as more houses].”

The ministry can give advice, but the central government does not have direct authority over the policies of Seoul city.