Koreans go to the poles with Nordic walking

Koreans go to the poles with Nordic walking

Kim Kyung-tae, center, a Nordic walking expert, walks with members of his group on a trail along the northern circuit at Mount Namsan in central Seoul. By Kang Jung-hyun


Around 20 people gathered on Mount Namsan in central Seoul earlier this month and were moving rapidly along a trail, stabbing at the ground with poles and vigorously stretching their arms. They looked like skiers except that they weren’t on a slope covered with snow. They are members of a Nordic walking club. Nordic walking refers to a method of walking with poles, and was developed by professional skiers from Finland to maintain their physical condition during the summer.

The group had started at the National Theater of Korea and walked to the trail, which stretches 6 kilometers and takes 1.5 hours to traverse.

Kim Kyung-tae, 40, a professor of social physical education at Korea University, is a Nordic walking evangelist. “As an expert walker, I’ve tried various walking techniques,” he said. “But Nordic walking is the most effective and the safest.”

He noted that since the activity doesn’t strain the knees or joints, it is appropriate for the elderly.

“In countries like Switzerland, Nordic walking is especially beloved as a ‘silver sport,’?” he said. 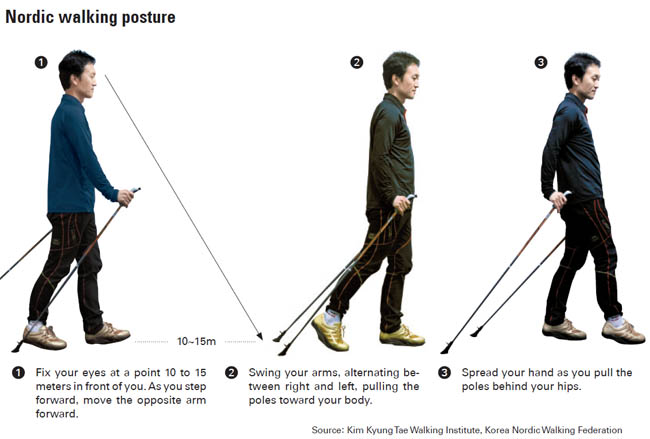 Regular walking, running and climbing are known to strain the joints. But in Nordic walking, the poles move below the center of gravity and the body weight is distributed evenly, reducing the strain on the joints.

Yeom Jang-ryeol, 57, said, “When I was young I ran marathons. But as I grew older everything started aching - my knees, heels and joints.”

These days, he participates in Nordic walking twice a week and his wife and son now join him as well.

Nordic walking is more dynamic than ordinary walking but is devoid of the drawbacks of running.

According to Professor Kim, regular walking requires that you move your feet only. But Nordic walkers move their arms and legs as though they are running. 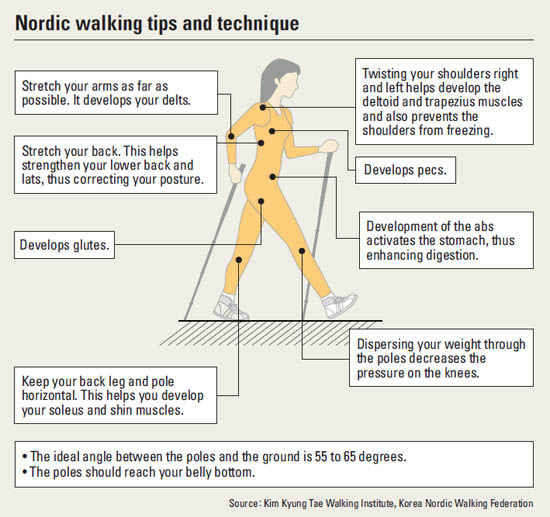 Some Nordic walkers, like Oh Gwang-hee, 58, carry folding poles in their bags so they can walk wherever and whenever they want.

Since the sport is not yet popular, and because she is still young, people have asked Oh why she does it.

Oh said that until five years ago, her body was twisted from her waist to her legs. Two years ago, however, she discovered Nordic walking and her posture has returned to normal.

“Nordic walking, which uses both the upper and lower parts of the body, helps you develop strength in your upper and lower back, thus correcting your posture,” said Park Sang-shin, chairman of the Korea Nordic Walking Federation. The activity is also recommended for people with shoulder or back problems. It is also good for anyone with poor posture.

Professor Kim said that people should use poles that are specially designed for Nordic walking and that nonfolding poles are more effective than folding ones in absorbing the impact from the ground.

He also said it is important to find the right poles for your height and that the poles should reach your belly button. To calculate the length, multiply your height by 0.68. For example, if you are 170 centimeters tall, a 115-centimeter pole is appropriate. If the poles are too long, your shoulders go up and you can’t fully stretch your arms, making you slouch, which in turn decreases the effectiveness of the activity. A pair of poles ranges from 120,000 won ($104) to 180,000 won.

Anyone is welcome to join the Nordic walking club. The group meets at the gate of the National Theater of Korea’s Main Hall Hae at 7 p.m. every Monday. On every third Monday of the month, the club meets at Dulegil in Yeouido, western Seoul. The group will also rent poles to members who need them.