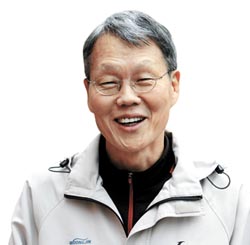 After a decade and a half of failure, Oh Se-beom, 56, finally passed the Korean bar exam this week

“I thought it would only take five years, but it’s been 15. Still, I’m happy to think that by becoming a lawyer I can help the people who need it,” Oh said with a smile.

The results of the 53rd bar exam were announced on Tuesday, with the Ministry of Justice announcing that Oh is the oldest person to pass the bar in 10 years.

Oh, whose favorite Chinese idiom is, “The foolish old man moves a mountain,” first took the bar in 1997 and every year since.

Oh, a linguistics major at Seoul National University, was a student activist in the tumultuous 1970s and participated in the 1977 demonstrations to abolish the Yushin Constitution, passed in 1972 during the Park Chung Hee regime. The new constitution overturned the previous one, which had limited the number of terms that a president could serve to two consecutive terms, and enabled Park to be re-elected for a six-year term without a limit on the number of terms he could serve.

As a result of his activism, Oh was incarcerated for violating Presidential Emergency Decree No. 9, promulgated in 1975, which prohibited any activities against the Yushin Constitution and permitted arrest without warrant and imprisonment of those who violated the provision. He was consequently expelled from school.

In 1979, Oh was part of the Myeongdong “YWCA fake marriage” incident, which was a cover-up for a pro-democracy movement against the autocratic Yushin regime, the first rally after Park’s assassination, and was again sent to jail.

After his release, Oh found employment in a boiler company. In 1987, as unions began to proliferate, he formed a labor union and was subsequently fired from the company. After applying for help with a regional labor relations commission on unfair labor practices, he filed a wrongful termination suit against his former employer.

Unable to accept defeat, he decided to represent himself in the trial and succeeded in winning. At the appeals trial, however, the company was represented by a large law firm and Oh lost. But it was this experience that made Oh determined to become a lawyer.

“Working as a consultant in the office of attorney Kim Chil-jun, who used to give me legal advice, I realized that there are a lot of things that a lawyer can do,” he said. “My heart was filled with a sense of urgency that I, too, wanted to help those who are in difficulty.”

When his family heard he wanted to become a lawyer, though he was over 40, they cheered him on. His wife took on all sorts of jobs ranging from tutor to water purifier salesperson. His two daughters were also steadfast supporters.

Oh said, “My oldest daughter became a doctor and my second graduated from military school and is a second lieutenant.”

When asked if had any advice for his younger colleagues, with whom he will enter the mandatory two-year training course at the Judicial Research and Training Institute next year, Oh replied, “Of course each individual’s effort is tremendous, but don’t forget that you are a product of society.”

Meanwhile, the Ministry of Justice revealed that a total of 707 people passed the 53rd Korean Bar Examination. The recipient of the highest score was Kim Su-min, 24, a fourth year student at Kyungpook National University, and the youngest person to pass the exam was Park Jeong-hun, 21, a third year student at Seoul National University. Both are women. The total number of women who passed the bar was 264, or 37 percent of all test takers.