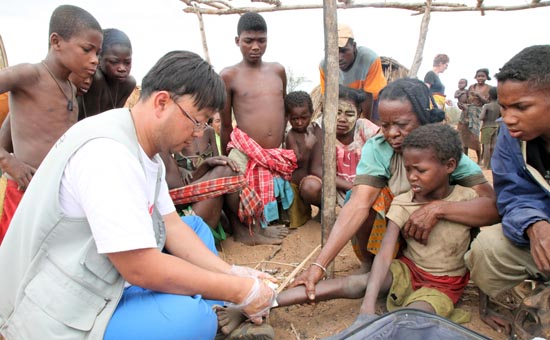 Surgeon Lee Jae-hoon examines a child while volunteering in Africa. Lee is the recipient of the country’s first Lee Tae-seok award, named after the late Roman Catholic priest whose life as a volunteer in Sudan was recounted in the film “Don’t Cry, Tonj.” Provided by the Ministry of Foreign Affairs and Trade


Since 2006, Lee Jae-hoon has treated around 2,000 people, administering life-saving drugs and performing 100 operations, all while traveling 12,000 kilometers a year from one remote area to another in Madagascar.

That he has done this for free with only as much basic surgical equipment as he and his medical team can carry is nothing short of inspiring.

In recognition of his service, he was honored with the first Lee Tae-seok Award by the Ministry of Foreign Affairs and Trade on Thursday.

“I can’t even match his [Lee Tae-seok’s] feet, so I’m not sure I’m worthy of receiving this,” the 44-year-old surgeon said as he accepted the award.

The award was established in honor of the late Father Lee Tae-seok, who died of colon cancer in January of last year at the age of 48 after more than seven years of service as a medical volunteer in Tonj, Sudan. His life story has been recounted in books and a KBS documentary called “Don’t Cry, Tonj.”

Lee Jae-hoon said his path had never intersected with that of Lee Tae-seok, though the two were both volunteering in Africa, but he said he was inspired by his life and work.

A graduate of Korea University medical school and a doctor at Severance Hospital in Seoul, Lee Jae-hoon started volunteering in Madagascar in 2005 after two years of language study in England.

In 2006, the government of the East African island country requested that he serve as a surgeon at an Itosy community hospital in the capital of Tana. With the hospital as a base, he began offering medical treatment to people in remote areas and later launched a traveling medical service that provides surgery and drugs such as antihelminthics, which rid the body of parasitic worms.

Although Madagascar is six times as large as Korea, there are only three local surgeons for an area the size of one of Korea’s provinces.

Lee said he and his team can only visit around 10 villages per year. While in each village, they receive patients from as many as 90 neighboring villages. As there are around 20,000 villages in the country, it will take 2,000 years to visit every place, he said.

“It is very urgent that we train local people there as doctors,” he said. “We need education programs, professors, hospitals and colleagues. We really need them.”

Behind his service is Christian faith. He said his childhood dream to become a missionary in Africa had driven him to go to medical school and then to volunteer in Africa.

A Protestant Christian missionary group from here assigned him to Madagascar. Still, his service to his religion is accomplished through medical treatment, not building churches, he said.

“Helping people in need and freeing them from disease, I think that is my way of doing missionary work,” he said.

Korea resuscitated diplomatic ties with Madagascar in 1993 and has since maintained the relationship, but does not yet have an embassy in the country due to political uncertainty there.

In accepting his award, he said he hoped the Korean government would help the many poor and unfortunate people there through assistance from the Korea International Cooperation Agency and other such programs.

Lee said that though he had returned home to receive the award, he had plans to go back to Madagascar soon for an extended stay.

“I have worked at a large hospital in Korea, but I feel that this place needs me more,” he said. “I hope I can work there as long as I am needed.”