Lee says FTA has detractors, but is ‘the right thing’

Lee says FTA has detractors, but is ‘the right thing’ 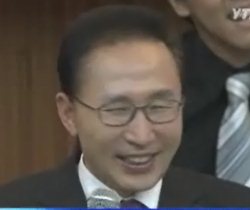 Admitting that opposition remains to the Korea-U.S. free trade agreement, President Lee Myung-bak yesterday said it was “the right thing to be done” for the country’s economic survival.

Lee said the free trade agreement will lift most trade and investment barriers between the two countries and create an opportunity to boost the competitiveness of the country’s agricultural industry, and he urged farmers to have confidence in themselves.

It was Lee’s first direct comment on the FTA, fiercely protested by opposition lawmakers, since it was finally ratified Tuesday in an unruly legislative session complete with a tear gas attack on the acting speaker by one opponent. Since the ratification, anti-FTA demonstrations have taken place every day in the streets of downtown Seoul.

Lee’s remarks were delivered during a Blue House luncheon yesterday to show appreciation for the nation’s postal service workers. In his closing remarks, Lee focused on the ramifications of the Korea-U.S. FTA amid a global economic crisis.

“There were groundless rumors spread that an appendectomy will cost 5 million won [$4,295] and medicine prices would go up,” Lee said. “But the public generally agrees that this is a means for our survival.”

“The farmers are very worried about pork and poultry imports,” Lee said. “The labor costs are very expensive in the United States and in Denmark. Pork and poultry produced with expensive labor will be imported to Korea through long routes. And yet, they are still cheaper than the Korean produce.

“What are the problems? Korean farmers are much smarter than American and Danish farmers, so why can’t they make it cheaper?” he asked, stressing that the farmers must not avoid efforts to improve their competitiveness.

He also gave an example of the improved competitiveness of Korean grape farmers after the country’s free trade agreement with a major global producer of grapes, Chile.

“When we signed the FTA with Chile, many said the Korean farm industry would be crushed,” Lee said. “But our farmers improved the breed of the grapes and produced more excellent kinds. Why are we afraid of pork and poultry imports? We should have confidence and work hard.”

Lee also said the FTA with the United States is crucial for Korea, an export-driven economy, to survive the current global economic crisis.

“What’s right must be done even if there is opposition,” Lee said. “That is the way for a country to advance. Right now, we are having a struggle for our survival and advancement in this difficult time.”