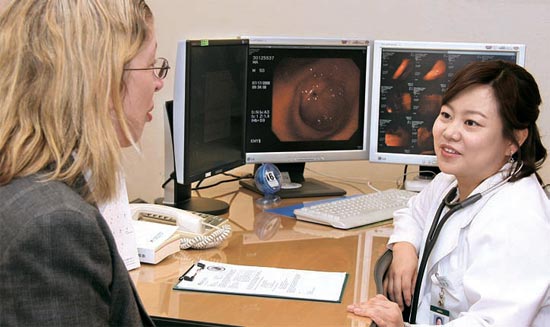 It was the first patient treatment agreement signed between Korean medical institutions and a foreign nation, and a novel way to expand Korea’s medical tourism industry.

To celebrate the agreement, three officials from HAAD got full checkups lasting three days and two nights at the Seoul National University Hospital.

According to the agreement, after providing medical treatment to an Abu Dhabi citizen, a Korean medical center will report the treatment to the Abu Dhabi health department within six months, and the HAAD will pay the hospital fees within 45 days in Korea’s currency via the UAE embassy in Seoul.

Every year, 13,000 patients from the UAE go abroad for medical treatment, according to Korea’s health ministry, and HAAD sends some 3,000 patients who had difficultly being treated in the UAE abroad, covering the full cost. Most go to Thailand, Singapore, Germany or England.

Of the 81,700 foreign patients who received medical treatment in Korea last year, 949 were from the Middle East and 54 from the UAE, with an average treatment cost of 133 million won ($115,000) per person. The health ministry estimates that by 2015, more than 110,000 foreign patients will be treated at Korean hospitals, which can bring in as much as 811 billion won in revenues.