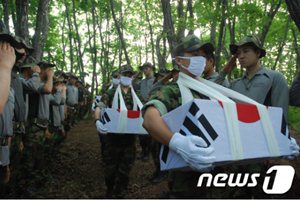 The surviving family member of a soldier killed in action during the Korean War, who was promised a measly 5,000 won ($4.29) in compensation, will now receive 9.46 million won under new guidelines by the Ministry of National Defense.

Kim Myeong-bok, 62, was notified by the Ministry of Patriots and Veterans Affairs in June, over three years after she first filed for compensation, that she would receive 5,000 won in compensation for the death of her brother Yong-gil, who was 18 when killed in 1950.

The ministry initially denied Kim’s application in 2008, saying the right of claim was only good within five years of Kim’s brother’s death.

The ministry based its compensation on Korean War-era regulations, which stated that bereaved family members of a deceased soldier would receive 50,000 hwan, worth about 5,000 won today, prompting public outrage and criticism from the Anti-Corruption and Civil Rights Commission.

Describing the new guidelines, Kim Il-saeng, chief of personnel and welfare affairs at the Ministry of National Defense, said, “The compensation amount specified in the regulations will be converted [to take into account inflation] and paid.”

Thus, the Defence Ministry will compensate Kim 6.82 million won, as well as additional interest of 2.64 million won as the payment was delayed.

The new regulations will not apply retroactively to anyone who has already received compensation for a fallen soldier.

Last year, for the 60th anniversary of the Korean War, the Defense Ministry made special efforts to find surviving family members of killed soldiers and tracked down 148.

“The bereaved wives, children and other family members of the fallen soldiers will receive compensation based on the new guidelines,” Kim said.