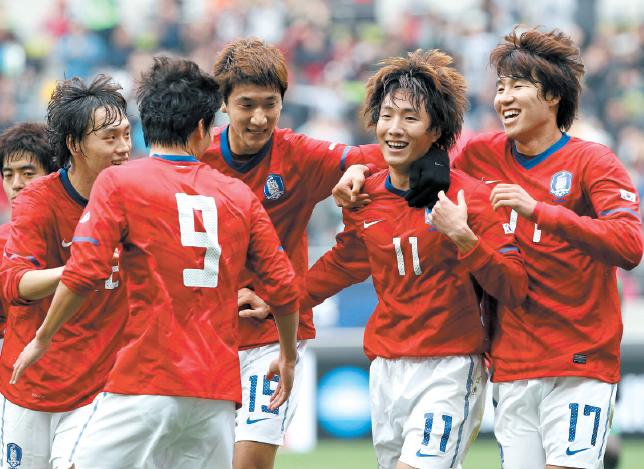 Korea’s Cho Young-cheol, second from the right, celebrates with teammates after scoring a goal against Saudi Arabia during their Asian qualifiers for the 2012 London Olympics at Seoul World Cup Stadium yesterday. Korea won 1-0. [YONHAP]


A penalty-kick goal from Cho Young-cheol gave the Olympic football team a 1-0 victory against Saudi Arabia yesterday, helping the Under-23 squad move a step closer to the 2012 London Games.

Korea had never beaten Saudi Arabia on the Olympic level until this match, coming into the game with a 0-1-1 record versus the Middle Eastern team. But a solid performance from midfielder Cho got Korea over the hump and widened the Taeguk Warriors’ lead atop Group A.

With the victory, Korea has tallied seven points with two wins and a draw, while Saudi Arabia remains in a last place with just one point.

In the final Asian qualifying stage, only top seeds from each of the three groups clinch spots in the Summer Games. The runners-up will have to enter a playoff before playing another round against fourth-placed team from the African qualifiers.

With 27,000 home fans gathered at Seoul World Cup Stadium, Korea was creating good chances from the start, thanks to the performance of Cho, who joined the team with four other J-League-based footballers on Friday.

The J-League players were unable to participate in the match against Qatar last week as the Japanese clubs were reluctant to release their players. Unlike the World Cup qualifiers, clubs are not obligated to send their players to the Olympic qualifiers.

Korea could have given up the opening goal to Saudi Arabia just two minutes into the match when team captain and center back Hong Jeong-ho’s back pass to goalkeeper Lee Bum-young was intercepted by Saudi forward Yahya Hussain Dagriri, but Lee was able to block the shot.

Cho, who plays for Japan’s Albirex Niigata, then stepped up to lead the team’s attack with powerful penetration from the flanks and threatening shots. He was able to put the ball into the net in the 25th minute with a header, but the goal was disallowed after he was ruled offside.

However, just eight minutes later, it was Cho again who put the ball past Saudi Arabia’s goalkeeper - and this time it stood.

The 22-year-old midfielder was pushed by Saudi defender Ahmed Walibi inside the penalty box and earned a penalty when Jung Woo-young delivered a free kick from the left flank. Cho then stepped up to take the kick and gave Korea a 1-0 lead in the first half.

In the second half, Korea replaced Jung with Yoon Bitgaram and forward Baek Sung-dong with Kim Bo-kyung to strengthen the midfield, while Saudi Arabia strengthened its offense by putting in forward Nawaf Al Abid and midfielder Bahbir Hatan in the 59th and midfielder Abdulahim Jezawi in the 67th.

With fresh members on the pitch, the Middle Eastern team tested the hosts with midrange shots in the 64th and 71st, but Korean defenders were able to hold on until the end of the game, despite showing fatigue as the game wore on.

Korean coach Hong Myung-bo admitted that although the team collected three points, the performance wasn’t their best because young players were tired after travelling to Qatar last week.

“It is true that we showed a different performance like we did against Qatar,” Hong said after the match. “If we scored an additional goal after the first goal, we could have played an easy game.”

Korea’s next match is against Saudi Arabia on the road on Feb. 5 next year, followed by a trip to Oman on Feb. 22 before playing the final qualifier at home against Qatar on March 14.