Banks trying to beef up services for expatriates

Banks trying to beef up services for expatriates 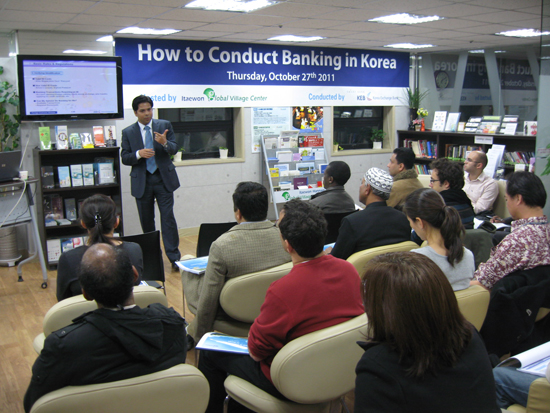 Alok Chakraborty, manager of the foreign customer division of Korea Exchange Bank, gives a presentation on banking for expats at the Global Village Center in Itaewon, central Seoul, late last month. Provided by the bank


On the first floor of the Seoul Finance Center building in the heart of Gwanghwamun, central Seoul, the hushed atmosphere of Shinhan Bank’s Seoul Global Center branch, which caters exclusively to expats, is a sharp contrast to the constant customer traffic of the regular Shinhan Bank branch for locals right outside its door.

“We get about 20 to 30 customers a day,” said Hwang Dae-geu, general manager of the Global Center branch. “Unlike other branches that have to meet performance criteria such as sales targets, we are focusing on building the Shinhan brand among the expat community.”

In recent months, Korea’s commercial banks have been increasingly eyeing a growing and relatively untapped market in their own backyard - Korea’s burgeoning expat community.

However, industry insiders say the profitability of expat banking remains unproven, because of the finite number of customers, their transience and their great diversity. Marketing services to diplomats, country heads of multinational companies and Southeast Asian blue collar workers is no easy feat. 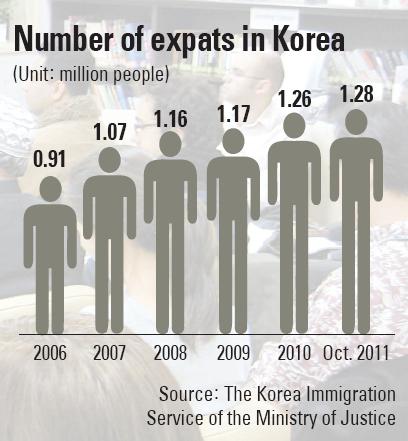 Past 7 p.m. on a weekday late last month, some 15 expats gathered at the offices of the Global Village Center in Itaewon for a seminar on banking for expats offered by the Korea Exchange Bank’s foreign customer division.

The small but varied group, coming from different jobs, countries and planning on different length of stays in Korea, had an equally diverse batch of questions for KEB official Alok Chakraborty, ranging from ways to manage the Korean won’s volatile exchange rate to access to Internet banking in foreign languages.

“Internet banking in India is relatively simple, but here in Korea there are many hurdles for an expat,” said Deepak Narwani, a middle-aged businessman from India who came to the seminar despite having lived off and on in Korea for the past 20 years.

As for Michael Reyes, a young freelance writer from Canada who planned to return to his home country in a few months, his concerns focused on how to wrap up his finances before leaving Korea.

“There are so many little things you have to make sure about before you move away,” he said. “A service that smoothly manages the transition would be very helpful.”

Considering that roughly 3 percent of the world’s population in 2011 consisted of immigrants, according to the International Organization for Migration, Korea has a relatively sizable expat community.

And although at the present growth rate the expat community stands to reach 9.2 percent of Korea’s population by 2050, their numbers could grow much faster should the Korean government adopt an open immigration policy to combat Korea’s low birth rate.

With foreigners’ numbers rising, the industry No. 3 by assets, Shinhan Bank, officially threw its hat into the ring by establishing a foreign customer department in August this year in a field currently dominated by KEB, bringing fresh competition and a new infusion of products.

However, insiders say the growth of the expat community does not equal instant profitability, as most expats stay in Korea for a short time.

“No matter which bank it is, retail banking for expats doesn’t make much profit,” said Jang Chi-kyoo, the head of the foreign customer division at KEB. “Most expats stay for a few years at the most, and they usually don’t have the bulk of their assets here.”

Moreover, expat numbers are still relatively small, while their needs are myriad.

“We call them all expats, but over 500,000 people in the expat population are blue collar workers from Southeast Asia or people of Korean heritage from China. For them, sending money home is their chief concern,” said Hwang.

“On the other hand, people from advanced economies are asking about completely different needs: online banking on Macs, credit card issuances, loans, you name it.”

“The customers’ points of view are completely understandable when they ask for online banking on Macs and better English Web sites. But what they don’t realize is the initial cost of developing an English Web site for online banking is roughly 1 billion won ($873,000), then it has to be continuously updated and managed,” added Hwang. “When companies are making decisions, such considerations pose a difficulty.”

Hampered by such factors, the development of services for expats has been slower than many customers would like. KEB, the local leader in retail banking for expats, which also holds a 40 percent share of the corporate banking market for foreign enterprises investing in Korea, announced earlier this month that it has added Japanese and Chinese operators to its call center, while online banking in those languages is slated to be offered next year.

While Shinhan Bank is rushing to catch up, spokespeople of other leading commercial banks such as Kookmin, Woori and Hana said they are providing limited services targeting expats at select branches, but mentioned no concrete plan for expanding the business.

Banks say they will continue to seek synergies between expat banking and other operations to reap profitability from sources other than massive deposits - most notably with corporate banking for foreign companies in Korea or overseas operations.

“There are some 14,000 foreign invested corporations in Korea,” said the KEB’s Jang. “The expat community operates by word-of-mouth, and if we expand our customer base as expats recognize our bank for providing differentiated, quality service, we can translate some of that success to corporate banking sector as well.”