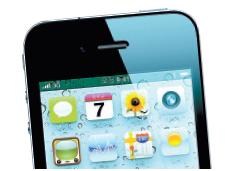 The number of smartphone users in Korea, which exceeded 20 million in late October, wasn’t even counted before two years ago. There were some “smartish” handsets on the market, but people used them for voice calls and texts, rarely for apps or multimedia.

“The main driving force behind the rapid growth of Korea’s smartphone business was the iPhone,” a source in the electronics business said. “It triggered companies to make R&D investments.”

Smartphones have made life easier and more fun. They’re also used to spread false rumors in cyberspace and rally voters during elections. Their mushrooming popularity has led to clogged data networks and a whole lot of dropped telephone calls.

The Korea JoongAng Daily surveys the changes smartphones have brought to Korea - good and bad - two years into the revolution.