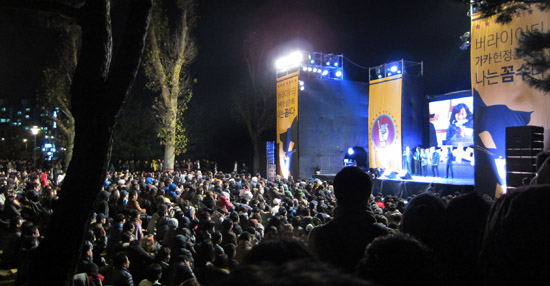 A live performance by the “Naneun Ggomsuda” (I’m a Petty-Minded Creep) online talk show cast drew more than 10,000 people to Daejeon’s Yuseong Park on Nov. 19. The cast had its first concert on Oct. 29 and is on a nationwide tour. [YONHAP]


DAEJEON - On Nov. 19, around 10,000 people braved a frigid night and waited in Yuseong Park for an outdoor talk “concert” that would serve as an emotional catharsis for the crowd by taking part in a bitter lampooning of the president and his conservative party.

Over the speakers, a goofy voice announced, “Welcome to the broadcast dedicated to President Lee Myung-bak, ‘Naneun Ggomsuda!’?” Raucous cheers erupted, making the affair resemble more of a rock concert.

For the next two hours, the four hosts of the so-called concert stood on stage, without a script, and traded wide-ranging conspiracy theories about the president and the Grand National Party.

President Lee had an affair with Erica Kim, the hosts claimed, the same woman who in 2007 accused the then-candidate of being involved in a financial scam. And their affair produced a love child, according to the hosts, with the baby sharing the president’s same small eyes.

The headline-grabbing April disclosure of the secret marriage and divorce of music legend Seo Taiji and actress E Jiah, the concert hosts charged, had actually been orchestrated to cover up a court ruling on the same day that acquitted SisaIN, a weekly magazine, on charges of running a false report on the president’s alleged involvement in the BBK scandal.

President Lee’s push to privatize state-run Incheon International Airport, the hosts alleged, was actually because he himself wanted to purchase shares for personal gain. And the president himself arranged for prosecutors to charge Kwak No-hyun, the superintendent of the Seoul Metropolitan Office of Education, of bribery the day after Oh Se-hoon resigned as Seoul’s mayor, the hosts argued.

Started in April, their online talk show - part political satire, but mostly disseminating conspiracies - has tapped into the seething anger of the country’s disillusioned young voters with the conservative establishment, quickly becoming the world’s top political podcast on the App Store and an unprecedented phenomenon.

According to polling firm Realmeter, more than six million voters said that they have listened to “Naneun Ggomsuda” at least once, making many analysts believe the show helped bring liberal independent Park Won-soon to victory in the Seoul mayoral by-election. The show had urged listeners to vote because many speculated that high voter turnout would help Park.

At the Daejeon concert, the festivities had an air of a religious revival, complete with hymns and fervent believers, attracting residents from both the city and around the country. All of the venue seats were filled several hours prior to the start. Those who arrived later had to sit on the ground.

Most of the people at the concert were between their 20s and 40s, and a lot of them were young women.

For people sitting far away from the stage, a big screen was installed in the middle of the park that played a series of awkward, unflattering images of President Lee. Later, the hosts led the audience in a song, “Closer to Naegok-dong,” which satirizes President Lee’s purchase of a land under his son’s name. The song was a parody of “Closer to the Lord,” a Korean Protestant hymn. “My lifetime wish is to manage my properties well and become a millionaire. Amen,” the audience sang in unison.

The land President Lee purchased had once been designated as a greenbelt, but Lee rezoned the area in 2006 when he was mayor of Seoul. Many local real estate officials say that property prices in the area, in southern Seoul, will skyrocket once full-scale development projects start.

After the song, the hosts boasted about their newfound fame. “We have already been interviewed by several foreign press outlets, such as The Los Angeles Times and The New York Times. At a concert in Ilsan, we were interviewed by Al Jazeera.”

Because of the cold weather, the talk concert was frequently paused for a string of rock bands to allow the hosts to take a break. But despite the cold and the two-hour run, few people left and most even stayed after the end to get autographs from the four hosts.

“I saw a new kind of culture that I have never seen in my life through Na-ggom-su [the acronym of the talk show name],” said a 39-year-old man from Seoul on the condition of anonymity. “The secret to their popularity is their honesty, which scratches other people’s itches and sides with the weak people.”

O Seon-mi, a 29-year-old woman from Daejeon, said, “We need them because they keep balance in a biased society. We have waited for people like them but there was no one who took the lead.” Another Daejeon resident, 40, refused to give her name but said, “They do what current media don’t. They criticize everything and make people feel free from pressure.”

Most of the show’s allegations, made in the course of 29 episodes so far, are unproven or groundless. The hosts often posit new conspiracy theories by saying, “Let’s make a story. What if ...” They are always sure to add, “But we know that His Highness [President Lee] is not a person who would act like that!” to protect them from litigation.

The brand of politics practiced by the show hosts has proved to have legs, regardless of the veracity of the various conspiracies, and the four-member team has already been involved in an array of political issues.

They denounced former Grand National Party Representative Na Kyung-won’s membership at a luxury beauty salon during her Seoul mayoral run, and they have urged people to attend anti-Korea-U.S. free trade agreement rallies. They themselves appeared at a Wednesday rally, telling participants to memorize the names of Grand National Party lawmakers who helped pass the FTA.

Na has accused the four hosts of spreading false rumors, such as her luxury beauty salon membership or the allegation that she lobbied GNP lawmakers to help her father’s private school foundation avoid an audit by the Education Ministry in 2005.

“Na-ggom-su makes people respond to politics emotionally, instead of seeing it as a matter of negotiation or policies,” said Shin Yul, a politics professor at Myongji University who is critical of the show. “If people want to change politics, they should change the political system, not criticize an individual. Condemning the president’s alleged affair is by no means related to his policies.”

Chun Sang-chin, a sociology professor at Sogang University, said that when people feel separated from authorities and the media, rumors and suspicions become rampant. “Conspiracies are prevalent when people feel that what they suspect isn’t being solved by public authorities and media. Exhausted with their lives, they still feel isolated from the government, and growing public distrust of society makes conspiracies flourish.”

Political scientists also said the popularity of the online talk show was the result of the Lee administration’s interference with the country’s media outlets. “The prevalence of ungrounded rumors and conspiracies is because of President Lee,” Shin said. “Compared to the Roh Moo-hyun administration, when most criticisms were allowed, the current administration has apparently tried to control the media. If the media has freedom to speak, there’s no room for conspiracies.”

Jae Jeong-im, a professor at Semyung University’s Graduate School of Journalism, said the administration’s interference with the country’s broadcast media was high. “In big broadcast companies, a slew of producers and reporters were dismissed or punished because of their reports that were critical of the government, and other reporters are having trouble releasing critical reports,” said Jae.