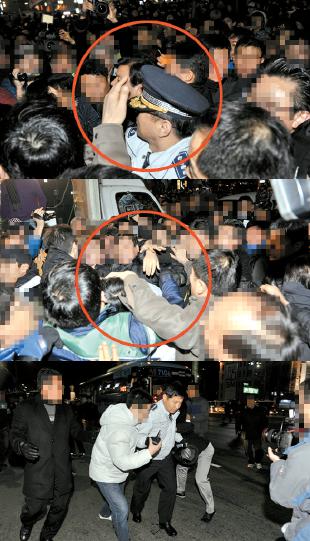 A local police chief was beaten by demonstrators at a violent rally on Saturday in central Seoul, where roughly 2,200 people gathered to protest the ratification of the Korea-U.S. free trade agreement.

Park Geon-chan, head of the Jongno Police Precinct in central Seoul, entered the rally with other police officers at around 9:30 p.m. in Gwanghwamun Plaza in an attempt to meet with opposition party lawmakers who were delivering speeches on a stage.

As he entered the rally, however, 100 protesters quickly surrounded Park, who was in uniform, and began assaulting him, punching him in his mouth, breaking his glasses and kicking him. Park received injuries on his left arm, face and his sides. The attackers also tore Park’s police insignia off his uniform.

Park managed to extract himself from the crowded demonstration and ran alone toward the nearest police station in Taepyeongno, central Seoul, dodging cars as he ran across a six-lane road. The police precinct chief arrived at the station at around 9:50 p.m. and locked the front door, escaping the 30 protesters who had chased after him.

At 10 p.m., Park held a press conference inside the locked station.

“I couldn’t let the hours-long illegal demonstration continue to cause public inconvenience, and I did it as head of a local police precinct,” Park said. “I will definitely seek punishment for those involved in the illegal act according to legal procedures.”

According to the police, Park’s injuries will take three weeks to heal.

Lee Gang-deok, commissioner of the Seoul Metropolitan Police Agency, condemned the attack at a briefing yesterday. “We can never accept that happened,” he said, adding that he would “sternly hold those involved in the violence and the leaders of the rally responsible.”

After analyzing video of the attack, police arrested a 54-year-old protester surnamed Kim at his home on suspicions of assaulting the police precinct chief. Police said that Kim had previously been arrested in August on charges of throwing a water bottle at a car carrying Kathleen Stephens, the then-U.S. ambassador to Korea. Police are also searching for other protesters who joined Kim’s attack.

But Representative Chung Dong-young of the Democratic Party denounced the police. “Park deliberately caused the violence by walking toward angry demonstrators. It’s total nonsense that 100 demonstrators attacked Park. It was just a scuffle.”

Another DP lawmaker, Representative Chung Bum-gu, said, “The attack is nothing, compared to what protesters have suffered from police.”

At around 10:20 p.m., demonstrators voluntarily dispersed. But during the two-hour protest, police arrested a total of 19 people including three middle and high school students who were later released. Among the 16 protesters still in police custody was Rhyu Su-jin, daughter of Rhyu Si-min, head of the People’s Participation Party, police said. Five of the protesters were confirmed to have attacked police officers and will be charged soon.