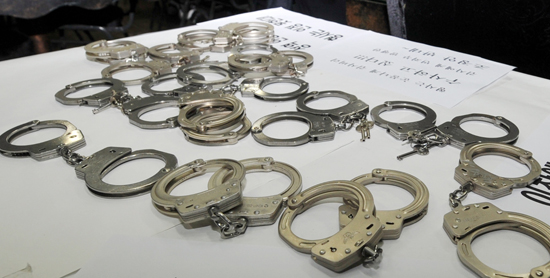 
Police said they would accept new regulations from the Prime Minister’s Office that would place police investigations under prosecutors’ supervision as long as they, in return, are allowed investigative jurisdiction over cases of prosecutors’ corruption.

The regulations, announced on Wednesday, allow police to begin or close criminal investigations independently but require them to report to prosecutors if an investigation risks violating a suspect’s human rights, such as raiding a suspect’s home or interrogating a witness.

About 150 police officers from across the country gathered over the weekend in Cheongwon, North Chungcheong, for an overnight forum with academics and legal experts and concluded that they were willing to accept the new regulations if the government accepts the police’s request as a check on prosecutors’ powers.

At the forum, several banners criticizing the new regulations hung inside the room: “Who will catch bought prosecutors?” and “Judicial reform for whom?”

Police officers who attended the event told the JoongAng Ilbo that most of them agreed with the proposal, saying that allowing them to investigate prosecutors’ corruption was necessary for real judicial reform.

“The new regulation, which makes the entire investigation process subject to screening by prosecutors when they are involved in the cases, is unfair,” a police officer who participated in the forum said.

Meanwhile, more and more police investigators have joined the protest, with more than 15,000 officers, about 70 percent of the country’s investigative units, declaring over the weekend that they would not conduct any further investigations.