Book aims to help children cope with loss of a pet

Book aims to help children cope with loss of a pet 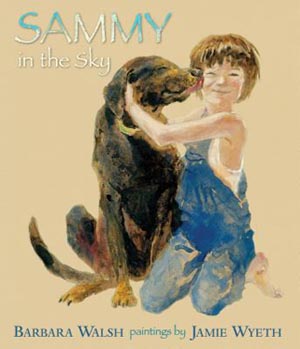 PORTLAND, Maine - First there was Marley, the rambunctious Labrador Retriever whose death brought readers to tears in John Grogan’s “Marley and Me.’’ Now there’s Sammy, a mixed-breed hound who’s the subject of another tear-jerker, a children’s book, “Sammy in the Sky.’’

When her beloved hound dog died, Pulitzer Prize-winning journalist Barbara Walsh watched her young daughters tearfully struggle with their loss and with tough questions. Walsh quickly realized there was a story to be told, one that she hopes will help other families deal with the loss of a pet.

But it wasn’t easy getting the book published, even after Walsh enlisted celebrated American artist Jamie Wyeth to fill the pages with illustrations in watercolor, acrylic and pencil.

Book agents and publishers were squeamish about the subject matter, yet Walsh and Wyeth didn’t want to sugarcoat the pain and sorrow that unfolds in “Sammy in the Sky.’’

“That’s my point. There’s nothing else like this out there.’’

Sammy, a mixed-breed hound, became the family’s first pet, purchased from a dog pound for $30 by Walsh’s husband, Eric Conrad, while they were living in Florida. Sammy became a cherished family member, earning Eric’s oft-repeated moniker, “The best hound dog in the world.’’

The hound showed love and patience. He licked Emma’s cheeks when Barbara and Eric brought her home from the hospital. He slept next to her crib.

“She’d play doctor and wrap him in bandages and put bonnets on his head. He would just sit there. She used to sleep on him. He was her pillow,’’ Walsh said. “He was this amazing, gentle hound who looked after her. And she considered him to be her best friend.’’

As pet owners know, all good things must come to an end. The family, by now living in Cape Elizabeth, Maine, discovered a lump on Sammy, and he was diagnosed with cancer at age 12. The girls were told to enjoy their time with him, because it was drawing short.

On the night he died at home, Emma echoed her father’s words: “You’re the best hound dog in the whole wide world.’’

After the tears dried, Emma kept asking her parents why did Sammy have to leave, and where did his spirit go.

She would run inside after school and holler out Sammy’s name, forgetting the hound was gone. Nora sometimes got angry, shaking her fist at the sky and ordering Sammy to come back down to earth. She wondered aloud if there were a ladder long enough to reach the sky, so she could go see him.

Wyeth said he liked Walsh’s story because it was real.

“It’s not cute. It’s not sweet. It’s kind of edgy,’’ said Wyeth, whose works are on display at the National Gallery of Art, the John F. Kennedy Library and the Museum of Modern Art, as well as the Farnsworth Museum in Rockland, Maine, and the Brandywine River Museum in Chadds Ford, Pennsylvania.

The artist - son and grandson of renowned painters Andrew Wyeth and N.C. Wyeth - has been surrounded by dogs and farm animals since he was a boy; “Portrait of a Pig’’ is among his best-known works. He currently has three dogs - Wiley, Iggy and Voler - who spend the summer with him on the coast of Maine.

“Dogs are more important to me than people, actually,’’ Wyeth said. “The death of a dog wrecks me more than the death of a person, which is probably not a very nice thing to say. I just think of them as total equals, if not superiors.’’

Wyeth, who is not an illustrator as his grandfather was, returns most of the 10 or 15 manuscripts he receives each year from hopeful authors. But he said Walsh’s story touched him, so he agreed to bring the tail-wagging, tongue-flapping Sammy to life in his paintings.

As they collaborated, there were still battles to fight, even after children’s publisher Candlewick Press of Somerville, Massachusetts, agreed to publish the book.

Wyeth was chagrined when the art director suggested the girl looked too sad in one of his paintings and that it might be a good idea to lighten the sky, and the mood, in another. Wyeth resisted the changes.

“It’s the death of a dog. I mean, kids aren’t stupid,’’ said Wyeth. “We live in a day and age where everyone wants to dumb things down.’’

Opening a door to the difficult subject matter in “Sammy in the Sky’’ was a book by an old friend, John Grogan, whose best-selling “Marley and Me,’’ featuring the Grogan family’s lovable-but-destructive Labrador Retriever Marley, had readers reaching for tissues at the end.

Wyeth and Walsh will sign books on Dec. 11 at the Brandywine River Museum in Chadds Ford, Pennsylvania, home of the Wyeth clan.

“Sammy in the Sky’’ is not expected to outsell Marley, but it’s doing well for a children’s book. The first printing of 10,000 sold out in a couple of weeks; the book is now on its third printing.

Librarians and veterinarians have told Walsh the book fills a niche.

She hopes it helps parents, teachers and children talk about life and death, joy and grief - and helps families to find a way to celebrate a pet’s life, like Walsh’s family did.

Indeed, books that aim to help youngsters get through the loss of a pet are few and far between, said John C. New Jr., professor of public health and outreach in the University of Tennessee College of Veterinary Medicine. There are similar books, but many are self-published, he said.

“Yes, there are books aimed at children, but there aren’t a lot of them. And they’re not the type of book normally carried in a bookstore,’’ he said.

As for Walsh, her family has moved forward after Sammy’s death six years ago.

The family has a new dog, a Tennessee coon hound named Jack.

Sammy in the Sky