Taekkyeon practitioners / A jultagi performer / Weaving of mosi in Hansan

Taekkyeon (a traditional Korean martial art), jultagi (tightrope walking) and the weaving of mosi (ramie fabric) that originated in the Hansan region in South Chungcheong were dubbed intangible cultural treasures by the Unesco Intergovernmental Committee for the Safeguarding of the Intangible Cultural Heritage in Bali, Indonesia. 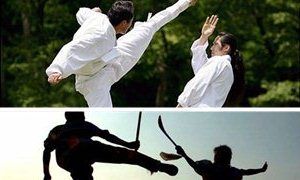 With the latest addition, Korea now has 14 items of Intangible Cultural Heritage of Humanity as recognized by Unesco.

Taekkyeon, the first martial art to be recognized by Unesco, involves fluid and rhythmic movements that resemble dance. The movements are also used as daily exercises, and currently there are about 50 official masters certified by the Taekkyeon Korea Association, which holds national competitions three times every year.

Before the announcement yesterday, it was expected that taekkyeon would be in competition for the recognition with China’s kung fu.

But China withdrew its bid before the committee meeting in Bali after failing to submit sufficient information, according to Unesco’s preliminary report.

While taekkyeon is a form of martial arts unique to Korean culture, tightrope walking is considered more of an entertainment, and questions have been raised over what’s unique about Korean jultagi.

The skill of weaving mosi in the Hansan region has been handed down from mothers to daughters. The region has a suitable climate for growing ramie, and its women are involved in the harvesting of the plant, bleaching, yarn spinning and the final weaving.

About 500 people in Hansan are still actively participating in mosi weaving.

Many other cultural traditions made Unesco’s list yesterday including mariachi music in Mexico.

The Royal Ancestral Rite and Ritual Music at the Jongmyo Shrine, which the kings of the Joseon Dynasty (1392-1910) used in ceremonies were added to Unesco’s list in 2001, and pansori, a traditional Korean style of narrative opera, was added in 2009.