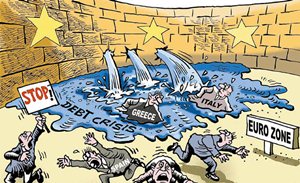 Citing a slowdown in exports, the OECD lowered Korea’s economic growth outlook for this year to 3.7 percent, down 0.9 percentage points from its forecast in May.

The Paris-based organization also downwardly revised the nation’s predicted growth for 2012 to 3.8 percent from 4.5 percent.

The organization made the announcement yesterday in its OECD Economic Outlook report.

According to the report, Korea’s domestic consumption is expected to grow 2.6 percent this year, down from a predicted 3.5 percent in May.

Meanwhile, it forecast the consumer growth index figure would reach 4.4 percent, up from 4.2 percent.

“The [Korean] economy experienced slowing output growth and rising inflation during 2011,” the OECD said in a statement. “The deceleration of exports has been accompanied by weaker domestic demand, including fixed investment.”

“Once the economy has overcome the current soft patch and high uncertainty, further policy interest rate hikes will be needed to contain inflation,” it added.