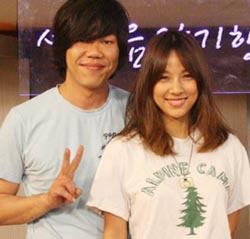 The two grew the affection towards each other as they worked together to make a song to raise awareness of abandoned dogs in July.

“Lee Hyo-ri and Lee Sang-sun have been seeing each other for the past four months,” said a spokesperson at B2M Entertainment yesterday, confirming the report.

The two are members of Korea Animal Rights Advocates and the shared interested in animal protection brought them closer, according to the agency.

Lee Hyo-ri was rumored to be engaged to singer Kim Dong-ryool last July, but it turns out that the person she was really dating was Kim’s close friend, Lee Sang-sun.

The lyrics of the song they worked together on, “Remember,” was made by Lee Sang-sun and sung by Lee Hyo-ri. Lee, former member of music band Roller Coaster, debuted in 1999.