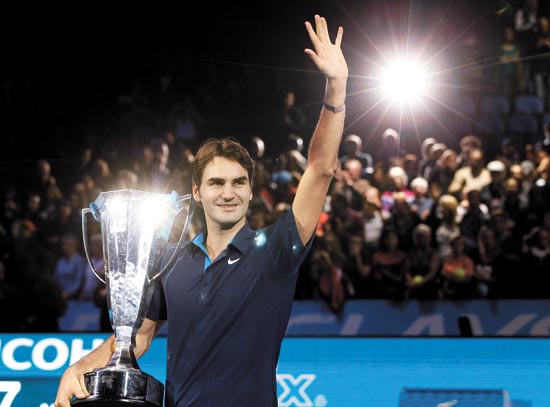 Roger Federer of Switzerland holds the winners trophy after he defeated Jo-Wilfried Tsonga of France in their singles tennis match at the ATP World Tour Finals, in the O2 arena in London, Sunday. [AP/YONHAP]

After a year that saw some uncharacteristic slip-ups from Federer in big matches, the Swiss former No. 1 shrugged off a second-set letdown to beat Tsonga 6-3, 6-7 (6), 6-3 and put his name on yet another page of the history books by winning a record sixth title at the ATP World Tour Finals.

“I know it’s one of my greatest accomplishments,’’ Federer said about his latest record. “This definitely is an amazing finish again to the season. I’ve never finished so strong.’’

Federer was by far the most impressive player this whole week at the season-ending event for the top eight players in the world, where his three group-stage victories included his most comprehensive win ever over Rafael Nadal, beating the Spaniard 6-3, 6-0 on Tuesday.

But he looked in danger of faltering against Tsonga when he failed to serve out the match at 5-4 in the second set and then wasted a match point in the tiebreaker.

But Tsonga, who became the first player to rally from a two-set deficit to beat Federer in a Grand Slam tournament in this year’s Wimbledon quarterfinals, couldn’t pull off another surprise this time.

Playing in his 100th career final, Federer broke for a 5-3 lead in the decider and served out the match to love, sealing his 70th career title with an easy volley.

Federer finished the season without a Grand Slam title for the first time since 2002, after also wasting a two-set lead against Novak Djokovic in the U.S. Open semifinals - where the top-ranked Serb saved two match points in the fifth set.

Federer took a six-week break shortly after that - in part, he said, to sort out his head after those losses to Tsonga and Djokovic.

The break seems to have worked, as Federer is undefeated since that U.S. Open loss, and finished the year with a 17-match winning streak following titles in Basel and Paris before coming to London.

While Nadal and Djokovic both lost twice to be eliminated in the group stage, Federer played some of his best tennis of the year and beat David Ferrer in the semifinals without facing a break point.

It was the third Sunday in a row that featured a meeting between these two players, as Federer beat Tsonga in the Paris final two weeks ago and again in their first round-robin match in London last weekend.