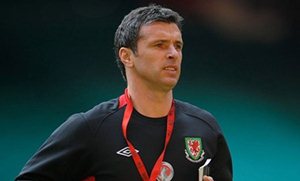 LONDON - Former Wales international footballer Gary Speed, who took charge of the Welsh national team just 11 months ago after playing for his country 85 times, has died. He was 42.

The Football Association of Wales announced Speed’s death Sunday without giving the cause but local police said there were no suspicious circumstances surrounding Speed’s death.

Speed is survived by his wife and two children.

“We extend our sympathies and condolences to the family,’’ the FAW said in a statement. “We ask that everyone respects the family’s privacy at this very sad time.’’

Speed, whose 85 caps is a Welsh record for an outfield player, had become Wales coach in December in a move long predicted by former teammates and commentators.

The youngest member of Leeds’ 1991-92 title-winning midfield and the first player to reach 500 Premier League appearances, Speed was renowned as a dedicated professional and had just coached his native Wales from their lowest FIFA ranking of 117th back into the top 50, with wins in four of their last five matches.

Speed began his career as a skillful, speedy, wide midfielder before maturing into a canny central player able to find space for his shots and headers with a well-timed late run into the area. He scored more than 100 goals across spells with Leeds, boyhood club Everton, Newcastle, Bolton and Sheffield United.

Speed became the first player to play in 500 Premier League games and the midfielder also scored in every topflight season in which he played until dropping out of the Premier League in 2008 when he joined Sheffield United.

Admired for his dedication, fitness and consistency in a 20-year playing career - as well as a knack for goals - Speed started out with Leeds and won the English league with the club in 1992.

With injuries finally beginning to affect him, Speed became a coach at Sheffield United and formally retired from playing at the end of the 2009-10 season. He became Blades manager early in the following campaign but was soon approached by Wales after John Toshack resigned as coach.

“It’s something that is very difficult to turn down when your country comes calling and I’m a very proud man at this moment,” Speed said about taking over as Wales coach.

Speed led the team to five wins from 10 matches, including a 4-1 win over Norway two weeks ago, earning plaudits for the side’s style of play and emphasis on youth.