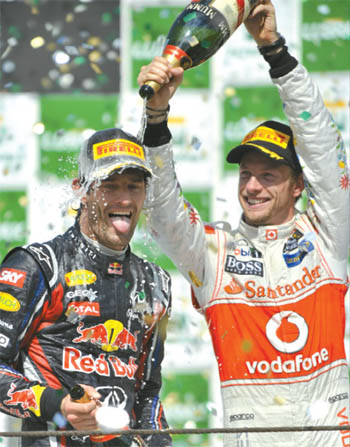 SAO PAULO, Brazil - Mark Webber ended the season on a high note with his first win of the year at the Brazilian Grand Prix on Sunday after Red Bull teammate Sebastian Vettel struggled with a gearbox problem.

Vettel, who had already secured the Formula One title, still finished second after letting Webber get past him almost halfway through the race at the 4.3-kilometer (2.6-mile) Interlagos track.

Webber easily passed Vettel on lap 30 after his teammate reduced his pace when he was told by the team that there was something wrong with his gearbox.

“Very early I got the call that we had to manage the gearbox problem,’’ Vettel said. “It sounded pretty severe. It started to get worse. My main priority was to finish the race.’’

Webber finished third in the championship with the victory. It was the Australian driver’s seventh overall win in F1, and his second in Brazil after winning in 2009.

“Today was a good grand prix for me. It’s not a bad thing to finish the year like this,’’ Webber said. “I felt good all weekend. It would have been nice to have a race all the way through [with Vettel] but he had a bit of a problem.’’

Fernando Alonso of Ferrari was fourth and crowd favorite Felipe Massa, in his 100th race for Ferrari, was fifth. Adrian Sutil of Force India finished sixth and Nico Rosberg of Mercedes was seventh.

Vettel, the winner in Brazil in 2010, won 11 races this season but finishes the year without victories in the last two races. He retired on the first lap in Abu Dhabi because of a puncture.

The second-place finish came a day after the two-time champion captured his 15th pole position of the season to break Nigel Mansell’s 19-year record.

The 24-year-old German was trying to win his 12th race of the year, which would allow him to finish the season only one victory shy of Michael Schumacher’s record set in 2004.

“I think we had a pretty amazing season and it would be over the top being upset now,’’ Vettel said. “So we take the second place, the 1-2 finish for the team, which is great.’’

Vettel had clinched the title four races ago, at the Japanese GP.

“To sign off the year with a 1-2 finish is a fantastic way to end the year,’’ Red Bull team principal Christian Horner said.

“To have won 12 grands prix and defended both world championships is fantastic.’’