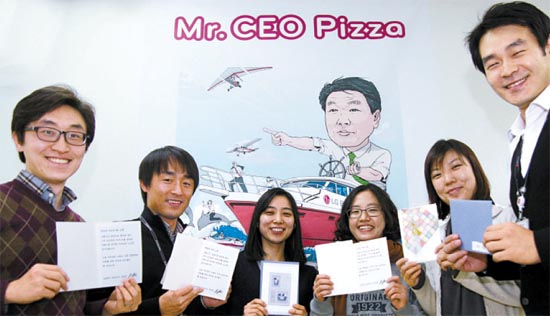 LG researchers hold up hand-written cards sent from their CEO, Koo Bon-joon, in front of a placard showing Mr. CEO Pizza with a caricature of Mr. Koo, at the research center in Anyang, Gyeonggi. provided by the company


A group of 100 researchers at LG Electronics received pizzas and handwritten letters from CEO Koo Bon-joon on Friday thanking them for their hard work in giving the company a new edge in terms of technological patents. 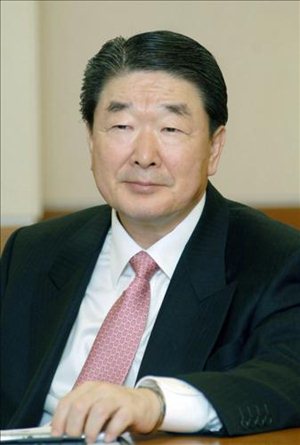 Chief Technology Officer Ahn Seung-kwon handed over the signed letters and fast food on behalf of the CEO, who also serves as the company’s vice chairman, at the company’s telecommunications research center in Anyang, Gyeonggi, LG said yesterday.

The rare gesture by such a senior executive at the nation’s second-largest handset maker feted its researchers efforts to establish Long Term Evolution (LTE) as a new global standard.

LG developed the world’s first LTE chip in 2008 and now holds 23 percent of global LTE patents, more than any of its rivals.

LTE is a fourth-generation (4G) mobile combination technology that facilitates data-processing speeds at between five and 10 times faster than 3G networks.

“I appreciate how hard you have worked day and night to achieve the top spot in terms of global LTE patents. I am proud of you,” Koo wrote. “Your efforts are laying a solid foundation for the future of the company.”

Koo has been slowly working to close the gap with rank-and-file employees since April through a series of contacts.

“We will claim victory in the LTE patent war to spearhead LG’s recovery,” a researcher at the ceremony said.

“We never expected to get a signed letter from the vice chairman,” another researcher said. “I’m going to frame it.”

At the event, LG researchers expressed their pride in becoming the world’s first mobile phone maker to hold the largest number of LTE patents by forming the three letters of the acronym using their desks.

LG has been making all-out efforts to develop LTE technology since 2005, at a time when the 3G telecommunications market was just starting to grow.

The company was the first to predict the era of 4G LTE that is now being ushered in, the company said.

According to data released by U.S.-based investment bank Jeffries & Co. in September, LG holds 23 percent of some 1,400 global LTE patents. The total value of the patents amounts to $7.9 billion.

The company launched the first LTE smartphone in Korea in October, the Optimus LTE, and sold 200,000 units in the first 50 days, according to LG.