Kaist chair speaks to the danger of nuclear weapons

Kaist chair speaks to the danger of nuclear weapons 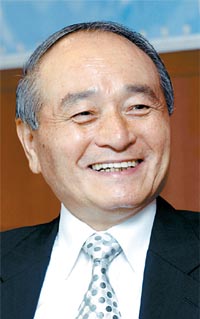 Oh Myung, chairman of the board of directors at Kaist and former minister of science and technology.

The term “nuclear security” is still unfamiliar to many Koreans, although it has emerged as a major international issue and Seoul will host a summit next year to discuss it.

To provide readers with a glimpse of the potential risks the lack of nuclear security would pose, the JoongAng Sunday interviewed Oh Myung, former minister of science and technology and chairman of the board of directors at the Korea Advanced Institute of Science and Technology (Kaist).

Oh is one of the members of the “Eminent Persons Group,” an advisory group which the Ministry of Foreign Affairs and Trade announced earlier this month for the Seoul Nuclear Security Summit.

The group is comprised of 15 renowned diplomatic and scientific figures at home and abroad. Here are excerpts of the interview with Oh.


Q. Why should we pay attention to nuclear terrorism or the illegal seizure of nuclear materials?

A. Nuclear terrorism is a definitive terrorism; it has all the elements of what terrorism is required to have. It can create horror all around the world in such a short time span. The possibility for a nuclear terrorist act to happen may be less than 1 percent, but the success rate of the terrorist achieving the goals with that act amounts to 99 percent. If nuclear materials fall into the hands of terrorists, it could give them the easiest but the most threatening means of terrorism. Indeed, illegal seizures of nuclear materials and illegal transaction of them are being reported much more than we think. We have to regard nuclear terrorism as a real threat not as hypothetical one.

Is it difficult for terrorists to acquire nuclear materials?

If they only have 25 kilograms (55 pounds) of highly enriched uranium, they can build a basic level of nuclear weapons. Already in 1987, U.S. experts on nuclear weapons gathered together to study a scenario in which terrorists already acquired nuclear materials and guessed the possibility of them making nuclear weapons out of the material. The conclusion was that the terrorists would have no problem building a crude nuclear weapon if they receive some help from experts in physics and chemistry.

Could you compare the risk of nuclear terrorism to other forms of terrorism?

Let’s assume that a nuclear weapon goes off in the middle of a city. It will trigger hundreds of thousands of casualties and it will have a huge impact - politically, economically, socially and culturally - not just on the city but on many other parts of the country and the world as well. In a deeply intertwined world like today’s, nuclear terrorism is not a problem for one country only. The damage transcends borders. It is not easy to deter such an event only on an individual country’s level. That is the reason why the top leaders of around 50 countries are gathering in Seoul for a nuclear security summit.

How big is the nuclear terrorist risk regarding North Korea?

The objective of the Nuclear Security Summit is to prevent nuclear terrorism by nonstate actors like terrorists and the issue regarding a specific state like North Korea is excluded from the agenda at the summit. However, the fact that major leaders of the world are gathering on the Korean Peninsula to discuss a nuclear security issue would itself be a significant message to the North [regarding its suspected nuclear activities.]

What is the assessment of South Korea’s nuclear terrorism preparedness?

Two years later, it established the Korea Institute of Nuclear Nonproliferation and Control. Nuclear security in Korea, however, can be much more effective when we work with other countries.