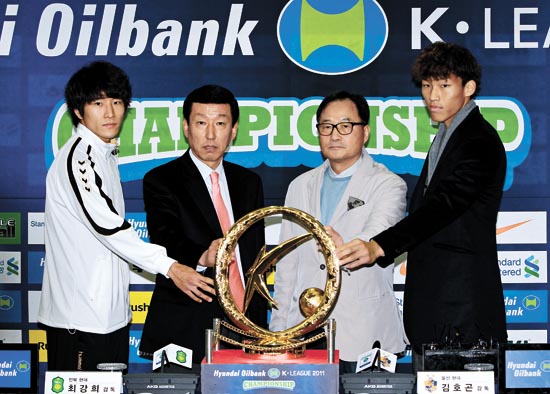 Jeonbuk coach Choi Kang-hee, second from left, and Ulsan coach Kim Ho-kon, third from left, pose in front of the K-League championship trophy with their players at the Korea Football Association headquarters in Seoul, Monday. [YONHAP]


The nine-month journey of football fever will reach its peak as the championship series of the Korea Professional Football League (K-League) finally kicks off tonight with two football clubs owned by Hyundai.

Jeonbuk Hyundai Motors FC, the regular season champion with 18 wins, nine draws and three losses, is looking for their second championship after winning their first title in 2009, while Ulsan Hyundai FC, who joined the six-team playoff as the last seed, is seeking its first title since 2005 and third overall.

The first leg of the championship series starts at 6:10 p.m. in Ulsan’s Munsu Football Stadium tonight and the second leg will be held at Jeonju World Cup Stadium in Jeonju, North Jeolla on Sunday. The winner will be decided on the aggregate score from the two legs with the away goals rule coming into effect if necessary, meaning teams that score more goals in away game will get an advantage in the event of a draw. This is the first time that the rule will be used in the championship series.

The clash between the two clubs is often dubbed as the “Hyundai Derby.” Jeonbuk’s parent company is Hyundai Motor Co., while Ulsan is under Hyundai Heavy Industries. 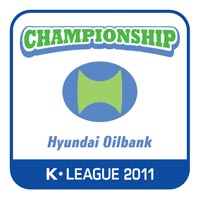 Jeonbuk is renowned for their offensive power, netting 67 goals in 30 games, the most among the 16 K-League clubs. The team finished runner-up in the Asian Football Confederation Champions League after losing to Qatar’s Al Saad in a penalty shootout, so it is hoping to overcome their disappointment by winning the championship.

“We have no injured players and training has gone well,” Jeonbuk coach Choi Kang-hee said at a press conference on Monday. “Our players are determined to win the championship and we are going to prepare for the match thoroughly.”

Ulsan, meanwhile, has proved to have a tight defense throughout the season. The team has conceded 29 goals in 30 games, which is the best record in the league along with Chunnam. The team is also on a high after beating Seoul, Suwon and Pohang to reach the series final.

Perhaps as impressive as the win is the fact that Ulsan played these three playoff matches in just over eight days. This packed schedule, however, is likely to mean that the players will experience some fatigue, handing Jeonbuk a potential advantage. But Ulsan coach Kim Ho-kon said the team is eager to make one final effort as this is the final stage.

“Jeonbuk has achieved so much this year, but if our players can overcome fatigue and maintain the pace we have been playing at, we can put in a good performance,” Kim said.

The meetings between the teams in the regular season ended with one win each and a draw. Jeonbuk won the first match 1-0 in May, before Ulsan got revenge by winning 4-1 in the quarterfinals of the K-League Cup. The other games ended in a 0-0 in July.

History shows that the first game is critical. Since 1998, teams that lost the first leg of a championship final have never gone on to win the title and both coaches acknowledge that the first match is key.

“It is important to show our usual performance in the first leg,” Choi said. “We haven’t showed good form when we play defensively, so we’re going to focus on our offense.”

Kim emphasized that their defense will try and contain Jeonbuk while looking for opportunities to counter attack. Kim also hopes that the Jeonbuk players have lost their game rhythm after having not played a competitive match in more than 24 days.

Meanwhile, Ulsan hosts the match tonight for free to draw more fans as the scheduled kickoff time makes it difficult for office workers to visit the stadium on time.