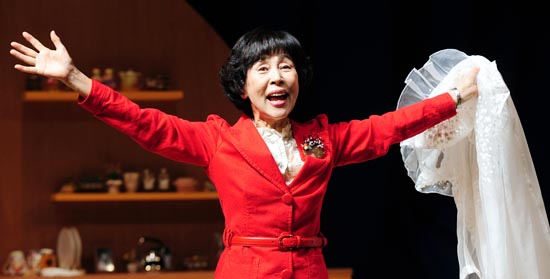 Actress Son Sook, who plays Shirley Valentine in a monodrama of the same title, demonstrates her excitement before her trip to Greece at the Seoul Arts Center Jayu Theater early this month. The play runs through Sunday. [NEWSIS]


Once they tire of their everyday routine, people get to thinking about doing something different and taking a trip to an exotic place to think about what they really want to do with their lives. Sixty-eight-year-old actress Son Sook once again becomes a housewife in her 40s in the drama “Shirley Valentine” and reflects on her life as a mother and wife.

Son, who played the role when the play premiered for the first time in Korea in 1994, again visits the stage with the same role for the third time after her recent performance in 2005. But this year’s performance focuses more on the actor - although it is already a monodrama in which only one actor appears - because it is the first of the Seoul Arts Center’s Best Actor Series.

“I feel honored to be the first to open the series, but it is also a lot of pressure,” said Son at the press conference early this month. “I’m trying to enjoy everything since the audience will feel what I feel.”

It might be worrisome that the actress is 20 years older than the character she is playing, but with Son’s two previous experiences the monologue is smooth. Son talks to herself in the kitchen about what she thinks of her patriarchal husband, who has to have a steak dinner on every Thursday, and her children who don’t want to take care of their parents.

What she says is more like what she would not share with others. It might be interesting for audiences to overhear a person’s soliloquy regretting their life and wishing to break from the routine, because they can find comfort in knowing that others feel the same way as they do.

The character later decides to take a trip to Greece with a friend without even telling her husband. This also gives the audience vicarious satisfaction, and shows hope that people can dramatically change where they stand and how they live.

With the tight economy and the news full of financial woes, watching a show of a middle-aged woman who departs from her routine and travels to Greece with full financial support from a friend is just too good to be true. But it is still liberating.

For anyone wanting to see a glimpse of Son acting as Shirley Valentine almost 20 years ago, the photos of her former performances are on display outside the theater.