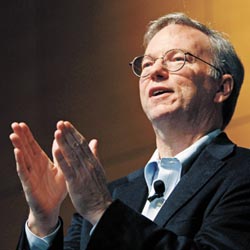 “Koreans are impressively productive; here is a sign from one of the offices when I was there.” - Eric Schmidt, executive chairman of Google

It seems that Eric Schmidt can find inspiration in the unlikeliest of places. In Korea, Google’s executive chairman found it in a restroom.

Last Thursday, Schmidt uploaded a picture of an inspirational placard on his Google+ social networking account that read “Winning isn’t everything, but wanting to win is” in both Korean and in English.

The placard was later confirmed as the one hanging inside a door in a bathroom stall on the first floor of the Posco Center in Daechi-dong, southern Seoul.

The picture was believed to have been taken at the Posco headquarters in Seoul earlier this month when Schmidt visited Korea and had a meeting with the steel giant’s Chairman Chung Joon-yang.

“Koreans are impressively productive,” he remarked in the message that accompanied the snapshot. “Here is a sign from one of the offices when I was there. From a tough war in the 1950s to a real economic miracle.”

Similar placards with inspirational sayings can be found in many restroom stalls in Korea, with one of the most popular being “a beautiful person leaves a beautiful environment behind.”

Whether it’s the government, local media or companies, Koreans often look overseas for inspiration in terms of their work ethic to social mores. This even extends to CEOs looking for ways to transform their respective industries.

And with Korea engineering a remarkable economic success story just half a century after it was torn apart by civil war, leading figures in global business and finance are increasingly remarking on aspects of Korean-style business management with admiration.

This level of interest was further piqued by seeing how the nation dealt with the Asian financial crisis in the late 1990s and the 2008 credit crunch. 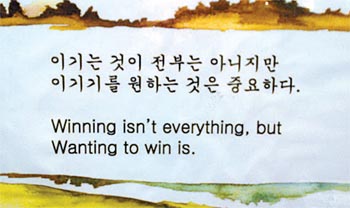 The image of an inspirational placard from a Korean restroom stall uploaded by Eric Schmidt, Google’s executive chairman, on his Google+ account last week. Captured from Schmidt’s Google+ account

Last week, Hyundai Motor announced its decision to eliminate the graveyard shift at its assembly plants by 2013. The decision was fueled by growing government pressure to follow the example of developed countries, where most manufacturers instilled two day-shifts in the 1990s.

However, it marked a notable turnaround for Korean auto manufacturing and Hyundai Motor in particular, whose chairman, Chung Mong-koo, once said that “factories should never stop running.”

Though improving conditions for employees is widely seen as a step towards sustainability, it is Korean companies’ voracious work ethic and productivity has seen the country recover from a number of economic hardships, in the eyes of many foreign CEOs.

Schmidt, for example, saw much to be impressed about during his visit to tech-savvy Korea. According to sources present when he met Seo Jin-woo, CEO of mobile platform operator SK Planet, Schmidt was struck by Seo’s business card. The card contained a near field communication (NFC) chip that automatically transmits the owner’s personal details onto a smartphone when held in close proximity. This puts it a step ahead of Schmidt’s own business card, which had a QR code that first needs to be scanned via a smartphone app before it can direct users to Google’s Web page.

“When he visited Korea early this month, Mr. Schmidt noted the rapid changes in the local IT industry and told employees that he was struck by the impression that the mobile industry is being led by Korea,” said Lois Kim, a spokesperson for Google Korea.

Yet another common theme invoked by foreign CEOs is the work ethic of Korean companies.

Jon Huntsman Sr., the founder of global chemical company Huntsman Corporation, said in an interview with a local newspaper earlier this year that he had been impressed by employees that “worked for 15 hours but still showed remarkable focus and productivity.”

CEOs of leading Japanese companies, which are widely known for their work ethic, also find the speed of Korea’s progress noteworthy.

“Every time I visit Korea, I am surprised by the speed and force of the changes,” said Takanobu Ito, the CEO of Honda, during the launching of the all-new Honda Civic in Seoul earlier this month.

“The sights on Seoul streets, or the increasing number of cars, drive home just how far Korea has come.”

Foreign executives and leading figures also often recall Korea’s resilient track record, through which the nation overcame the devastation of the 1950-53 Korean War, and recovered from both the 1997 Asian financial crisis and the 2008 credit meltdown.

Bill Gates has also commented on this. “Within a generation, Korea went from being a big recipient to being a big aid donor,” he said during an interview with the U.K.’s Daily Mail this year.

Warren Buffett, the chairman of Berkshire Hathaway, also cited Korea as an example of a country that has proven its ability to bounce back from adversity when he visited TaeguTec, a local tool-making company he owns through its parent, International Metalworking Companies, in March.

Some of this resilience is due to the cohesive nature of Korean society, according to other prominent figures. William R. Rhodes, Citigroup’s senior advisor, attributed Korea’s two-year recovery from the Asian financial crisis partly to the “gather gold movement,” in an interview with a local newspaper earlier this year.

This refers to a voluntary movement by local citizens to gather privately-owned gold to pay off the government’s foreign currency debt, which ran to some $30.4 billion at the height of the Asian financial crisis. Some 3.5 million people participated and donated 227 tons of gold.

However, the extent of Korea’s zeal for productivity - to the point of hanging inspirational sayings in restrooms - has raised concerns that conglomerates and businesses are excessively squeezing employees to further push their performance, which could end up resulting in lower productivity.

In fact, this is already an issue. While Koreans may put in more working hours per week than almost any other country, there are strong indications that efficiency levels in the office or factory are not that competitive.

According to a labor productivity gauge for 2011 provided by the Organization for Economic Co-operation and Development, Koreans were less than half as productive as their U.S. counterparts.