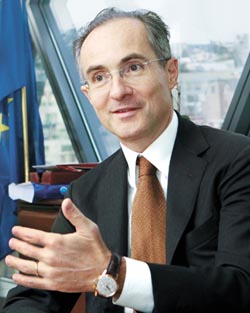 Italy’s economic situation is not as dire as the media says and its new technocrat government will be able to engineer a soft landing for the country’s economy and the European Union’s, according to the top Italian diplomat here.

Sergio Mercuri, Italian ambassador to Korea, sat down with the Korea JoongAng Daily for an interview on Nov. 22, a day after the largest ever business delegation from his country visited Korea to promote bilateral economic ties.

Mercuri said the delegation’s visit, arranged amid what he said was a hyped debt crisis in Europe, shows how Italy is resolute on staying on course for economic growth, not contraction, and how his country values Korea as an economic partner.

“Even now there is a lot of inaccurate descriptions of Italian reality circulating in the international press and sometimes even in the Korean press,” Mercuri said during the interview, which was held at the Italian Embassy in Hannam-dong, Yongsan.

“So we wanted to be clear on our will to keep on doing our business in the world and improve figures such as exports,” he said. “Not many people know that in 2011 Italian exports are increasing by 17 percentage points. So in real terms, there are signals of a lively economy.”

The debt crisis in Europe, now engulfing larger countries including Italy, the third largest economy in the euro zone, is creating huge uncertainties in the world economy and Korea, which predominantly relies on trade for survival, has suffered from volatile financial markets as a result of it.

Despite assurances from the government of new Prime Minister Mario Monti, the yield on Italy’s 10-year government bonds surged, briefly though, over 8.0 percent, last Friday. Monti, a former European commissioner who replaced Silvio Berlusconi as Italy’s prime minister on Nov. 16, is expected to announce a set of reform measures this week, possibly including austerity measures to reduce its 1.9 trillion euro debt.

Mercuri said some austerity measures, if announced, would be unpopular in Italy. But he said they wouldn’t spark a huge public backlash against the government as they did in other countries and in Italy in the past.

“I expect some unpopular decisions [to be made], but it would be much more acceptable than in the past, because it aims at particular programs,” the ambassador said.

He said along with austerity measures, the new government would also embark on a set of liberalization policies, and they will help overcome what have been considered structural economic problems, such as limited expansion in the size of companies.

He said the crisis in Europe has triggered a discussion of the dismantling of the euro zone, but he said that’s not “right reading” of how deep the unity of the euro zone has become. “Levels of internal exchanges” are so high, he said, it’s “as if we have signed free trade agreements among ourselves.”

“We created wealth, we created more exchanges, the presence of more Europeans in Korea and more Koreans in Europe,” he said of the Korea-EU pact that took effect in July.

To deepen the Italy-Korea relationship, an Italian delegation led by Emma Marcegaglia, chairwoman of the Italian industry federation called Confindustria, and Guido Rosa, vice chairman of the Italian Banks Federation, visited Korea between Monday and Thursday of last week.

The delegation was comprised of around 120 representatives of 60 companies in Italy.

He said Korea is being paid attention to not just for its market of 49 million people, but as a gateway to much bigger business opportunities in East Asia. “Northeast Asia may be the most promising part of Asia, and this is why we look at Korea,” the ambassador said.