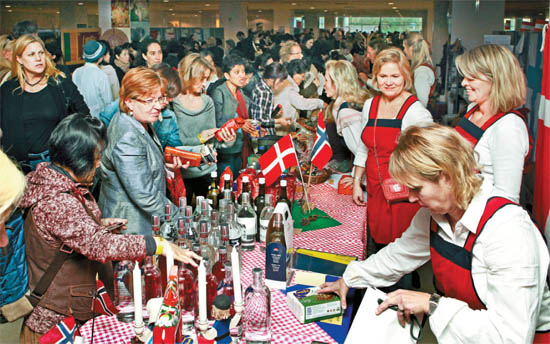 At the Seoul International Women’s Association’s 33rd Diplomatic Community Bazaar at the Grand Hilton Seoul on Nov. 15, around 3,000 people browse crafts, clothes and dishes donated by some 40 expat communities and embassies. The proceeds from the bazaar will be donated to charity, SIWA officials said. By Park Sang-moon


Roughly 3,000 people flocked to the Seoul International Women’s Association’s 33rd Diplomatic Community Bazaar at the Grand Hilton Seoul on Nov. 15, where about 40 expat communities and embassies donated the proceeds to charity.

International dishes, clothes and crafts were out in full force at the annual fund-raising event, including Pakistani rugs, Italian candles, Finnish chocolates and Korean ceramics. The event also featured foreign chefs from restaurants in Itaewon who sold street food to hungry bazaar-goers.

Over its 22-year history, the bazaar, put on by the nation’s biggest private association for female expatriates, has raised more than 2 billion won ($1.75 million) for some 30 Korean charities. In 2012, the association marks its 50th anniversary.

“The purpose of the bazaar is to raise funds for charities helping women, children, students, orphanages, senior citizens and immigrated children in and around Korea,” said Terri Hartman, president of SIWA. “Our welfare committee does a lot of research and chooses charities that are the most deserving and needy. We raise the money from the bazaar through the embassies who donate the profits they make to our charity.”

“For our 50th anniversary in 2012, we will have many events, a gala lunch in March and an art exhibition in August,” Hartman said.

Holding their babies in one arm and carrying shopping bags with the other, homemakers who heard about the bazaar began queuing 30 minutes before the event opened at 9:40 a.m.

Ahead of the upcoming holiday season, many shoppers swarmed stands selling seasonal items such as Christmas trees, homemade cookies and red candles.

“It’s my first year here, I love it, truly fun. I just bought a Christmas calendar from a German stand for my kid,” said Alisa Evans, an American homemaker. “I really liked African and Korean gifts as well. I will definitely come here next year.”

Many visitors flocked to the Indonesian stand, where four British women from a private organization called V.I.K.Y. were selling unique Christmas items.

“Many things are homemade like cookies and jewelry, and some things were imported from Bali, such as the trees,” said Vittoria D’Alessio, an Italian-English woman who was selling the items at the stand. “We, four creative English women, came here last year as guests and decided this year to participate in the bazaar more fully as sellers.”

Wines and gloves from New Zealand also were a hit. Shoppers were busy talking prices at a Pakistani jewelry stand, and shoppers couldn’t take their eyes off Japanese kitchen items.

“The plates with traditional painting on are the most popular,” Kiita Satomi, a seller from the Japanese Embassy in Seoul said. “We have participated in this bazaar annually.”

Some companies and artists also donated their goods for the bazaar’s raffle. One ticket cost 5,000 won, and Chanel’s No. 5 and MCM handbags were among the prizes. During the bazaar, traditional music performances took place to spice up the bustling market.

More than half of the visitors were foreign women, while some Korean homemakers also came with their friends.

“I just wanted to see what kind of bazaar this was,” said Park Eun-jo, a middle-aged Korean homemaker, who visited the bazaar for the first time and bought a Mongolian-style scarf. “I like that I could find what I couldn’t at ordinary Korean bazaars.”