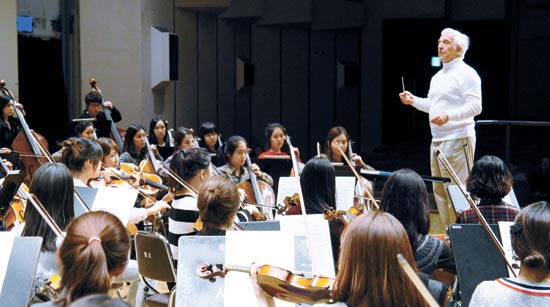 
On last Wednesday evening at Seoul Arts Center’s Concert Hall, hundreds of fans cheered and whistled upon the appearance of the world-renowned maestro Vladimir Ashkenazy.

With Ashkenazy’s first powerful swing of the baton, the Sydney Symphony Orchestra began playing Beethoven’s “The Creatures of Prometheus.”

To mark the 50th anniversary of diplomatic relations between Australia and Korea this year, the Embassy of Australia in Seoul has coordinated a series of events and activities throughout the year, beginning with the official launch of a Year of Friendship in Seoul in January.

This month, to celebrate the Year of Friendship, the Sydney Symphony Orchestra was also invited to hold a two-day concert at the Seoul Arts Center for the first time in Korea.

According to the Australian Embassy, a small group of performers of the Sydney Symphony Orchestra visited Korea, but this is the first time for the whole team to pay a visit to Seoul.

The first day concert in Seoul drew a large crowd of music enthusiasts in Korea as the cello virtuoso Mischa Maisky accompanied the orchestra.

“This is a very special opportunity to meet the world-class musicians at one place in my hometown,” said Kim Gwang-taek, 32, a classical music fan, who purchased a ticket for 250,000 won ($218).

Prior to the orchestra’s concert, 13 top members of the Sydney Symphony Orchestra, including the lead violinist Dene Olding, visited Seoul National University’s College of Music on Tuesday morning for the “Master Class at SNU,” in which the members met with music students from SNU to provide lessons as well as to hold a mini concert in the afternoon under the baton of Ashkenazy.

“This year marks the 50th anniversary of diplomatic relations between Australia and Korea. Our leaders have designated this year the Australia-Korea Year of Friendship,” said the Australian ambassador, Sam Gerovich, at SNU on Tuesday.

“In support of this year, it is fitting that one of Australia’s principal and oldest orchestras, the Sydney Symphony Orchestra, is making its first visit to Korea in its 79-year history with a full ensemble of 96 musicians.”