Barrichello says he’ll be back for another season

Barrichello says he’ll be back for another season 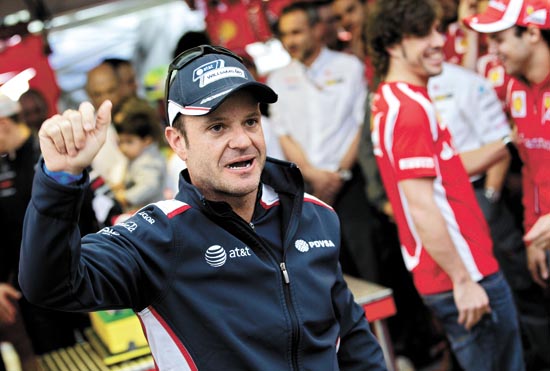 
SAO PAULO, Brazil - Rubens Barrichello’s parting words after the final race of the season in Brazil offered no acknowledgement he might have competed for the last time in Formula One.

“See you next season,” the smiling Brazilian told reporters on Sunday, offering a handshake.

His Williams team could offer him no such certainty but the man who has started more races than any driver since the championship began in 1950 - and well over a third of all grands prix held - was not saying any final farewells.

Instead the 39-year-old held up a drawing, colored in by his six-year-old son Fernando, that he had shown Brazilian television.

“They asked me ‘Are you going to stay next year?’ I said “Look I have my helmet for next year already painted. If I sign the contract, that’s going to be my helmet for the first race,” Barrichello explained.

“I’m not ready to finish just yet. I am really hopeful,” added the former Jordan, Stewart, Honda, Ferrari and Brawn driver.

“I feel like I am at the peak of my performance, I get on with the team very much ... the only thing lacking now is a more competitive car which I am pretty sure Williams will have. I want to drive the car,” said Barrichello. “I don’t need a big contract. I just need something that tells me I am driving next year in a competitive car. I’m not asking for any favors and I don’t want to be driving just for the sake of driving.

“I’m almost doing it for nothing already,” he laughed when asked whether he might race for free.

Barrichello, who started with Jordan in 1993, remains one of the most popular members of the paddock. The fact that, if Sunday was indeed his last race after 19 seasons on the road, Formula One had not given him a proper send-off troubled some but not the man who grew up near Interlagos.

While compatriot Felipe Massa performed “doughnuts” for the crowd, revving his engine and spinning the Ferrari around in a circle of smoke, Barrichello held back.

“I am trying to race next year,” he said. “If it was my last race I would have done doughnuts everywhere. I knew on my slowing-down lap that I could have said goodbye to them [the fans] but I was just waving. I know I will be back.”

In some respects Barrichello has been there before. In 2008, when Honda pulled out, his career looked finished until Ross Brawn, his former Ferrari technical director, threw him a lifeline at the renamed team because he needed his experience. The situation at Williams, a team not known for sentimentality, is different. There are rivals, such as Germany’s Adrian Sutil, who may also bring substantial funding.

On Sunday Barrichello simply focused on the racing. The only fun part of the race, he said, was when the team advised him his old Ferrari team mate Michael Schumacher, who had gone to the back of the pack, was catching up.

“I said ‘No way,’?” grinned the man who spent six seasons with Schumacher at Ferrari, winning nine races there but more often reduced to the role of riding shotgun for the seven-time world champion.