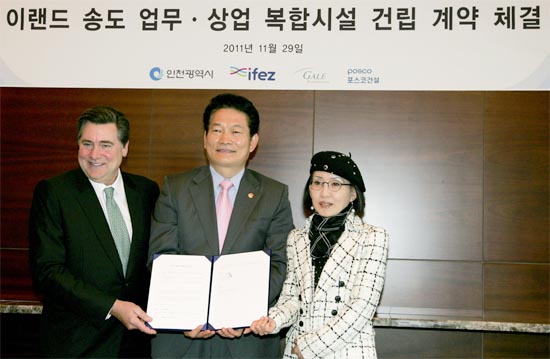 According to Gale International, the construction of E-Land’s shopping complex begins at the end of next year and is set to be completed in 2015 on a 19,587- square-meter plot in Songdo International Business District. The district sits on reclaimed land along Incheon’s waterfront, about 65 kilometers (40 miles) west of Seoul.

The complex will consist of a shopping mall including NC Department Store, as well as popular fashion brands, restaurants, hotels and offices.

E-Land, which entered the Chinese fashion market in 1994, is lauded as one of the most successful Korean companies in the region. The company currently runs 5,000 outlets in China and is the No. 2 player in the women’s apparel market in China.

“The Korean Wave is strong in China and the potential for Korean fashion and culture to grow there is limitless,” said Park Sung-gyung, E-Land Group’s vice chairwoman.

“Songdo is the perfect venue for us to attract Chinese tourists and increase our presence in China.”

Jenna Shim, a communications official at Gale International, said the financial terms of the deal have not yet been finalized because E-Land is working on designing its new shopping establishment.

Industry sources said the shopping complex will attract foreign tourists given that it is located 20 minutes from Incheon International Airport, and is just across from the under-construction Lotte Shopping Town.

“From E-Land Group to Lotte Shopping Tow, Songdo IBD will boast its major commercial district and be able to rise as a true shopping Mecca in Asia, soon,” said Stan Gale, chairman of NSIC.