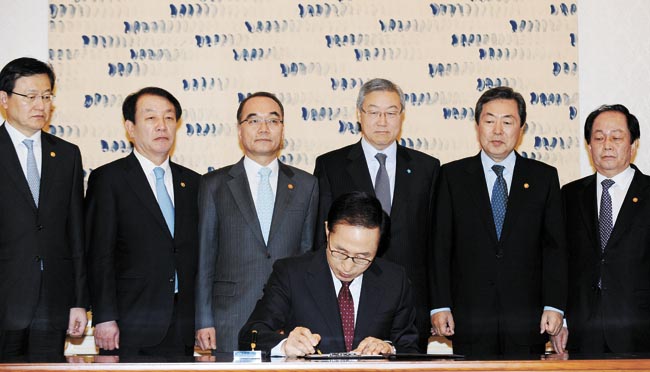 With his aides standing behind him at the Blue House yesterday, President Lee Myung-bak signs a package of bills linked to the implementation of the Korea-U.S. free trade agreement, the final step to put the landmark deal into effect. By Ahn Seong-sik


President Lee Myung-bak yesterday signed a package of bills linked to the implementation of the Korea-U.S. free trade agreement, the final step to put the landmark deal into effect.

With Lee’s signing of 14 bills into laws after a cabinet meeting yesterday, Seoul and Washington will begin discussions next month to actually implement the FTA. The two countries hope to put the FTA into effect starting Jan. 1, 2012, but a delay is possible depending on the progress of the implementation reviews.

The National Assembly ratified the FTA and 14 related bills on Nov. 22. The ruling Grand National Party supported the FTA, while the liberal opposition parties protested loudly and violently.

The U.S. Congress ratified the pact in October, and President Barack Obama signed the implementation bills in the same month.

“The Korea-U.S. FTA will open up the U.S. market, which is the world’s largest,” Lee was quoted as saying by his spokesman Park Jeong-ha after yesterday’s signing. “Although next year’s forecasts for the economy and exports are dark, let’s use the FTA as a good opportunity to overcome the challenges.”

Lee urged the government to thoroughly prepare for the Korean market’s opening to enhance the country’s competitiveness.

Before the signing, the cabinet endorsed the 14 bills. At the meeting, Lee told his ministers to clear up the public misunderstandings about the FTA by providing detailed explanations. Seoul Mayor Park Won-soon did not attend the cabinet meeting.

The opposition parties’ protests against the FTA accelerated yesterday morning as the Democratic Party held a demonstration in front of the Blue House to demand Lee not sign the bills. In addition to Representative Kim Jin-pyo, the DP floor leader, and senior member Chung Dong-young, 35 incumbent and former lawmakers joined the rally.

“If Lee signs the bills, he will be remembered as the president for the 1 percent of the people,” five liberal opposition parties said in a joint statement. “He will face strong resistance from the 99 percent.”