Health authorities yesterday confirmed the country’s first death from an iatrogenic Creutzfeldt-Jakob disease, saying the patient contracted the rare degenerative brain disorder from an operation decades ago. The disease is different from Variant Creutzfeldt-Jakob disease (vCJD), also known as human mad cow disease, and is not contracted by the consumption of infected beef.

The 54-year-old female patient died in November 2010 and was diagnosed postmortem with iatrogenic Creutzfeldt-Jakob disease, known as iCJD, according to the Korea Centers for Disease Control and Prevention and a report issued by the team of Dr. Kim Yun-joong, a professor at Hallym University’s College of Medicine. 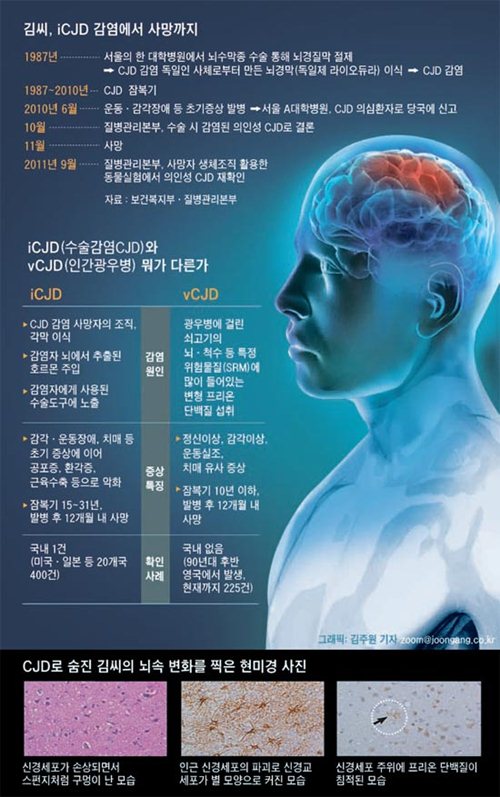 According to the authorities, the patient received surgery in 1987 to remove meningioma tumors. During the procedure, Lyodura, a patching material for brain surgery produced in Germany, was used. The raw material for the product was the dura mater of a human cadaver.

Doctors believe the Lyodura was made from a CJD-infected cadaver, and that’s how the Korean woman was infected with the disease.

The Centers for Disease Control and Prevention and Dr. Kim said animal experiments were conducted with tissue from the patient after her death. The tests confirmed that she was Korea’s first case of iatrogenic CJD. The details of the first case were released through a report by Kim in the November edition of the Journal of Korean Medical Science.

According to health authorities, Creutzfeldt-Jakob disease was originally recognized in three forms: sporadic cases from unknown causes, cases associated with a gene mutation and iatrogenic cases that resulted from accidental infection during a medical procedure. In the 1990s, vCJD was recognized, and the new form is believed to be linked to consumption of beef from cattle infected with bovine spongiform encephalopathy (BSE), commonly known as mad cow disease.

The health authorities said there have been more than 400 cases of the iatrogenic form reported in 20 countries around the world. Most infections were the result of contaminated surgical instruments or transplants of contaminated dura mater and other substances, including corneas and human-derived growth hormones.

According to health authorities, tens of suspected CJD patients are examined in Korea every year, but only nine cases have been confirmed so far. Seven are sporadic cases with unknown causes, while one patient was confirmed to have been infected through a gene mutation. The woman with iCJD was the ninth. There have been no vCJD, or human mad cow disease, cases in Korea the Centers for Disease Control and Prevention said.

According to the medical team that treated the patient, her incubation period for the disease was more than 20 years. According to their Journal of Korean Medical Science report, the patient was first referred to a hospital because of ataxia and myoclonus in June 2010. One month before visiting the hospital, she experienced general weakness and dysesthesia on her face and in her toes.

“In this patient, CJD, confirmed by examination of brain biopsy specimens, was related to a dura mater graft,” the report said. “She underwent a dura mater graft performed using Lyodura, a brand of dura mater linked to an ongoing international outbreak of most of the reported cases of dCJD [dura mater-associated Creutzfeldt-Jakob Disease].”

While cases of dCJD were reported in Japan, it was the first case of iatrogenic dCJD in Korea, Dr. Kim said in the report.

Although Lyodura is still used in brain surgeries, dura mater from animal or synthetic materials, not human cadavers, has been used since 1998, the Centers for Disease Control and Prevention said. But the incubation period of CJD is from 15 to 30 years and patients who received transplants before 1987 are still at risk.

The CDC said yesterday it will begin a massive epidemiologic survey to track down possible cases of iCJD. Lyodura products were commonly used in Korea, but there were many missing records of individual surgeries, making it difficult for the CDC to track patients at risk.

Concerns have been raised that the health authorities attempted to conceal the case although it was notified of the infection in October last year. “We were just worried that it might trigger an unnecessary human mad cow disease panic,” said a senior government official.

The Lee Myung-bak administration faced public panic about human mad cow disease after announcing the reopening of the Korean market to U.S. beef imports in 2008.

After the first iCJD case was revealed yesterday, the health authorities stressed that it was not human mad cow disease. Hallym University hospital has conducted biopsies or autopsies of 20 suspected CJD patients since 2006, but found no vCJD cases.