To Dec. 18: Lee Ufan, 75, has returned from his retrospective at the Solomon R. Guggenheim Museum in New York for a solo show. Lee was the third Asian artist to have his work exhibited at the Guggenheim, following Paik Nam-june (2000) and Cai Guo-Qiang (2008).

Through his work, Lee explores the relationship between things in their natural state and aims for moderation and coexistence. Here, he presents 10 new pieces that are bold yet concise.

“This exhibition will present works that cannot be simpler or more controlled than they are now,” the Japanese-based Korean artist said at a press event in mid-November. 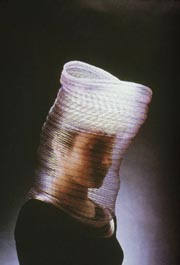 To Dec. 25: This rare exhibition of jewelry design could help redefine the art by demonstrating that jewelry is not always made of gold, silver or precious stones but can be a form of portable art and a means of communication that goes beyond decoration.

The exhibition features more than 300 pieces of jewelry by 64 artists from 18 countries.

Most of the pieces on display shatter our notions about the materials used to make jewelry or the body parts around which it can be worn.

One definitive example is the “Wearable Object” by Dutch artist Lam de Wolf. The work covers the body of the wearer from the neck to below the knees and consists of a group of square wood frames covered with textiles of various colors.

De Wolf was quoted by Sungkok as saying that with the series, she wanted to “make an artistic and social statement that was deliberately rebellious, antiestablishment, anticapitalist.”

Among the other works that challenge the common wisdom about where jewelry should be worn on the body is U.K. artist Caroline Broadhead’s nylon “Necklace-veil,” which makes it look as if the wearer’s head is trapped in a translucent folding-paper lantern. 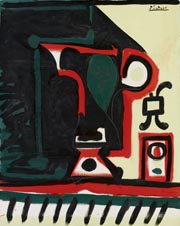 To Dec. 31: The Paris-based Opera Gallery showcases 40 works by a galaxy of modern art masters including the French Impressionist Claude Monet, the Spanish Cubist Pablo Picasso and U.S. pop artist Andy Warhol, to celebrate the 4th anniversary of the launch of its satellite gallery in Seoul.

CITY WITHIN THE CITY

To Jan. 15: A collaboration between the gallery and the Gertrude Contemporary in Melbourne, the exhibition focuses on urbanism - something the two countries and other industrialized countries share. The countries represented among the 17 participating teams of artists are Mexico, Lebanon and China as well as Korea and Australia.

One of the most enticing works is Melbourne-based artist Ash Keating’s “Zi Namsan Plus” (2011). The work comprises a computer graphic-generated image, hanging on a replica of a construction site fence, of a futuristic building on the slope of Mount Namsan in central Seoul. “Zi” in the title originates from the well-known Korean apartment brand “Xi.”

It is a sort of parody of the renderings of apartment complexes in progress that hang on fences at apartment construction sites, a common sight in Korea’s metropolitan areas. 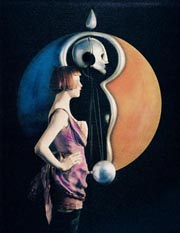 To March 18: Even those who don’t know much about high fashion are likely to know of Karl Lagerfeld, the creative director of French fashion house Chanel. But few will know that the 73-year-old designer, who is the force behind Chanel, Fendi and his eponymous brand, is in fact a renaissance man. Not only has he taken photographs of his own fashion collections since 1987, he has published books, done illustrations and recorded music. He even starred in an animated film for children two years ago.

This exhibition, a retrospective of some 400 photographs Lagerfeld has taken since 1987, highlights his photographic skills.