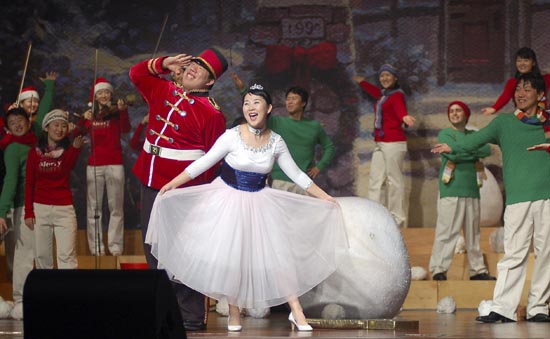 Today and Friday: Known for its stellar performance at the 2011 Pentaport Rock Festival, London’s soul funk band Mamas Gun is returning to Korea to promote its recently released sophomore album “The Life and Soul.” After the release of its first album “Routes to Riches” in 2009, the band became an instant success in Japan.

Noted for his eclecticism as a soloist, Grauwels has worked with international musician such as famed Guy Lukowski and Greek composer Yannis Markopoulos, who wrote a concerto for the flute dedicated to Grauwels that was played at the Olympic Games in Athens in 2004.

Dec. 10: The “Christmas Cantata” will be performed by the group known as the Gracias Choir and Orchestra. The performance will be a mixture of choir, musical and opera singing with such concert pieces as “Jingle Bells,” “White Christmas” and other popular carol songs. The Gracias Choir is known for their monthly singing performances usually at a low price of 1,000 won.

Dec. 21 to Dec. 31: The prestigious two-act ballet that comes once a year, “The Nutcracker” is back in theaters to celebrate Christmas as well as the end of the year.

Along with “Swan Lake” and “The Sleeping Beauty,” “The Nutcracker” is one of the three great ballets composed by Peter Tchaikovsky. Universal Ballet’s version is adapted from the version choreographed by Vasily Vainonen in 1934, with further adaptations by Oleg Vinogradov.

Universal Ballet has presented “The Nutcracker” every year since 1986.