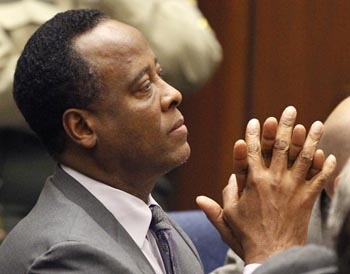 LOS ANGELES - The doctor who was convicted in the overdose death of Michael Jackson was sentenced to the maximum four years in prison Tuesday in a finale to the tormented saga of the King of Pop.

Dr. Conrad Murray sat stoically with his hands crossed as Superior Court Judge Michael Pastor repeatedly chastised him for what he called a “horrific violation of trust’’ while caring for Jackson.

“Dr. Murray created a set of circumstances and became involved in a cycle of horrible medicine,’’ the judge said. “The practice of propofol for medicine madness, which violated his sworn obligation, for money, fame prestige and whatever else may have occurred.’’

Pastor said one of the most disturbing aspects of Murray’s case was a slurred recording of Jackson recovered from the doctor’s cell phone.

“That tape recording was Dr. Murray’s insurance policy,’’ Pastor said. “It was designed to record his patient surreptitiously at that patient’s most vulnerable point.’’

Michael Jackson’s family told Pastor they were not seeking revenge but want the doctor who killed the superstar to receive a stiff sentence that serves as a warning to opportunistic doctors.

“The Bible reminds us that men cannot do justice, they can only seek justice,’’ the family said in a statement read by attorney Brian Panish. “That is all we can ask as a family, and that is all we ask for here.’’

The statement went on to say, “We are not here to seek revenge. There is nothing you can do today that will bring Michael back.’’

Murray was convicted of involuntary manslaughter after a six-week trial that presented the most detailed account yet of Jackson’s final hours but left many questions about Murray’s treatment of the superstar with an operating-room anesthetic as he battled chronic insomnia.