Kim Ki-duk reaches for a symbolic ‘Amen’ - and misses

Kim Ki-duk reaches for a symbolic ‘Amen’ - and misses 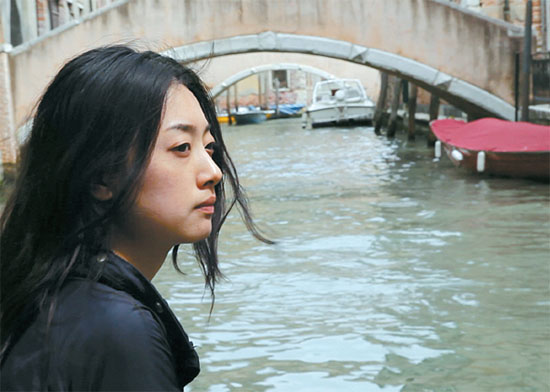 A nameless Korean woman wanders through the streets of Venice in Kim Ki-duk’s “Amen.” Provided by Cinecube

Compared to “Arirang,” his self-reflective ode to filmmaking and his 13-year career, which premiered at the same time as the new film, “Amen” feels almost like an afterthought, with the director himself saying in interviews that people who aren’t cineastes are not likely to warm to the film.

The story really has only two characters - a nameless Korean woman (Kim Ye-na) and a nameless masked man (Kim Ki-duk). The woman arrives in Paris, searching for a man named Lee Myung-soo, only to learn that he took off to Venice. On the train to get there, she is robbed and raped by a man in an army gas mask and later finds out she is pregnant with his baby.

The masked figure stalks her throughout her travels and then, interestingly enough, turns into a sort of guardian angel for the woman as he anonymously provides her with money, a jacket and other things when she falls asleep on park benches and trains. While stalking her, he also finds out that the woman is pregnant with his baby and, through messages written on objects he gives her, he urges her to give birth to the baby and says that he will turn himself in to the police.

In his moving 2003 film “Spring, Summer, Fall Winter .?.?. and Spring,” the director drew on Buddhist tenets to touch upon universal subjects of faith, personal growth, love and redemption. In “Amen,” he tries to incorporate symbols from Western religious traditions while telling a story about dysfunctional modern love plagued with underlying fear and miscommunication. But this effort doesn’t really add to the film or help the audience connect with the sorrow of the nameless woman. In some scenes, for example when the woman takes refuge in a cathedral, Kim draws on images of the Immaculate Conception of Mary, but the Catholic symbolism feels forced, stunted and a bit too literal.

Shot mostly with a handheld camera, the cinematography feels as disjointed and haphazard as the narrative. The film is less like storytelling and more of a modern fable, peppered with religious symbolism and dashes of B movie horror elements.

One place where the cinematography does work, however, is when the camera stands in for the lingering gaze of the masked stalker, connoting the voyeurism involved with watching and making films.

Another positive point about the film was its lead actress, Kim Ye-na, who during close-ups manages to be extremely expressive in portraying the lost heroine on a foreign continent.

Other than that, however, “Amen” frankly feels like a 20-minute short that drags on forever, with cinematography and a story line that feels like a film school graduation project - in a bad way.