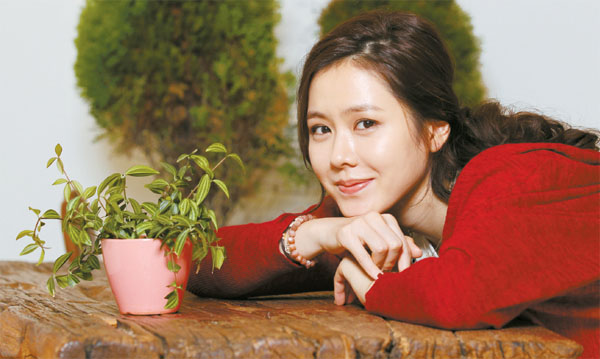 Actress Son Ye-jin returns to the silver screen for the first time in two years with the romantic comedy “Spellbound.” [JoongAng Ilbo]

Screen muse Son Ye-jin returns to the silver screen for the first time in two years with the new romantic comedy “Spellbound” (literal Korean title “Chilling Romance”), which will be released early next month. In the film, Son plays Yeo-ri, whose special powers allow her to see ghosts. Although the film defines itself as a romantic comedy, it also has touches of horror and melodrama, which Son said required her to broaden her acting.

Son said she feels more attached to this film than previous ones because it was her first film after she turned 30. In addition to that, the film was a transformation for Son, who has up to this point played characters who are fragile and prim.

Here are excerpts from the JoongAng Ilbo’s interview with Son.

Q. It’s hard to guess the genre of the film based on the title. 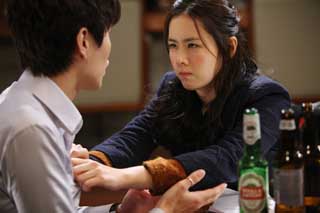 A still from “Spellbound”. Provided by CJ Entertainment

Did the mix of genres make the role more difficult to play?

It wasn’t easy, of course. But I tried to find a happy medium between comedy and horror.

This is your second comedic film in six years. What made you decide to do it?

It’s been a while since I’ve done a romantic comedy. The previous one was “The Art of Seduction” in 2005. I decided to do another before I got any older. [Laughs.] To be honest, I wasn’t sure about doing a romantic comedy before I appeared in “The Art of Seduction” because I’ve been doing a lot of melodramas. Back then, I wondered if the public would accept me in a comedic film.

What was it like to work with your co-star, Lee Min-ki?

We hadn’t worked together before this, but we got along far better than I expected. He was flexible and quick to respond to any given situation. Above all, he is open-minded and good-hearted.

It’s been 10 years since you made your debut in the entertainment industry. How do you feel about your career?

I used to go forward without looking back, but now I want to take a broader perspective. I also try to enjoy myself more at work.

There are three romantic comedies, including yours, slated for release this month and early next. People are already speculating about who the next queen of the romantic comedy will be, between Kim Ha-neul, Han Ye-seul and you. What do you think?

Actually, “You Are My Pet” [starring Kim] and “Penny Pinchers” [starring Han] were released at around the same time. But I feel some relief because my film will be released after.

Have you ever watched the recent hit drama series “Thousand Day Promise” featuring Soo Ae? The plot is very similar to your previous tearjerker “A Moment to Remember” (2004) in that both of the female leads are suffering from Alzheimer’s disease.

I’ve seen it. But Soo Ae’s character was different from the character I played. Although the two are suffering from the same disease, “Thousand Day Promise” tells a realistic story while “A Moment to Remember” tried its best to romanticize the dementia-struck female character. I think that’s the difference between the film and the drama series.

You’ve recently told multiple news outlets that you’ve come to have a wide circle of friends these days.

I used to keep in touch only with actors and actresses that I had worked with in the past. Back in my school days, I was the type of person who just had a couple of friends. I was afraid of meeting and getting to know new people. Above all, I didn’t know that you needed to meet new people if you are hurt by others.

I’m close friends with Kong Hyo-jin and Yun Eun-hye even though we’ve never worked together. I got close to actor Jung Woo-sung through our mutual interest in wine, and I credit him with teaching me all about it. And I often go out for drinks with actors from my new film “Tower.”

You used to keep a low profile when you were between films, but you’ve started to become active on social networking sites such as Facebook and me2day.

My agency recommended that I do it, but I actually think it’s good because I can communicate with my fans.


What kinds of roles to you hope to have in the future?