The nicest man in Korean cinema

The nicest man in Korean cinema 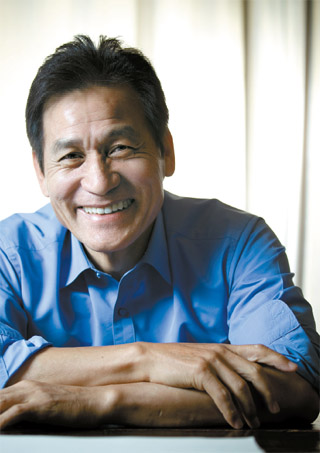 It’s hard to believe the talk about actor Ahn Sung-ki, 59, the man who is often cited as a living legend of Korean cinema. After having been in the public eye for more than 50 years, Ahn has built a reputation for kindness and charity through his work with organizations such as the Korean Committee for Unicef, where he has served as a goodwill ambassador for the past 19 years.

Yet the talk about him seems almost too good to be true.

He is said to be as polite to famous directors in their 60s and 70s as he is to the youngest of crew members doing the most menial tasks on set. And when he meets younger actors and actresses, he is always the first to break the ice by lowering himself.

Some of these details about Ahn have been revealed in a new biography of him that was published in Japan earlier this year by Iwanami Shoten Publishers.

The book, “Ahn Sung-ki: Portrait of a Nationally Admired Actor,” was written by Toshio Murayama, who runs a Korean language institute in Kyoto and says he’s a die-hard fan of the actor. It recounts Ahn’s rise from a budding five-year-old actor who used to sleep in actresses’ wardrobes on set to the man who became the face of film in the 1980s.

Murayama first came to Korea in 1986 to study the language and happened to see the film “Lee Jang-ho’s Baseball Team” in which Ahn plays a passionate baseball coach. In the book, Murayama writes that he was first fascinated by Ahn’s meaty performance but later became interested in him as a person and went on to follow his career.

The JoongAng Ilbo recently sat down with Ahn to talk about the book, his reputation for kindness and his life on and off screen.


Q. It was pretty surprising that a book about you was published in Japan, not Korea. How did the book come about?

A. Murayama and I met after I was selected as one of the judges for the 1994 Tokyo International Film Festival. The other judges were Roger Corman and Jeanne Moreau, and I still remember being excited to be part of a festival with top directors and actors such as them. Murayama was my interpreter, and that’s how we got to know each other. He contacted me three years ago and said he wanted to write a critical biography about me.

[American filmmaker Corman is often dubbed the king of B-movies, and Moreau is a leading French actress who appeared in the 1961 film “Jules and Jim.”]

Have you ever considered having a biography about you published in Korea?

I’ve received a couple of proposals [from Korean publishers,] but I wasn’t very excited about the idea, so the proposals fizzled out. Murayama told me he was interested in writing a book about me. I couldn’t stop him. [Laughs.] He came to Korea to interview me last year. During that time, he went everywhere he could in order to get information about me. He went to the Korean Film Archive, The National Library of Korea and second-hand bookstores. He even searched for and watched some of my rare early films. He wrote in the book that my debut film “Twilight Train” (1957) was based on the Korean novel “Nirvana Out of Desire” written by Yi Kwang-su, which is a fact that wasn’t known in Korea.

Why weren’t you excited about having a biography about you?

I’ve been living as an actor for a long time. Everyone knows about me. That made me reluctant to have a book about myself. On top of that, my life is not that exciting or interesting.


You’ve been lucky not to have been the target of rumors or scandals. Why do you think that is?

Maybe it’s because I know the nature of this industry, where the best and worst coexist. Since I was young, I’ve tried my best not to make mistakes. And I know myself pretty well. Actors back in the ’60s were handsome, but I don’t have smouldering good looks like that. I’ve tried to focus on acting instead.

It must be stressful to have been known as a “gukmin [nationally admired] actor” for such a long time. How do you feel about it?

I’ve made up my mind not to stray from the right path. I’ve done wrong, just as my characters have. But my parents were a great influence. My father was a film producer, and he was such a family man. My mother always felt sympathy for people in need, and I learned [from them] that lowering myself, instead of stepping on others, is the shortcut to success.

I’ve also tried not to forget that I’m a human being before an actor.

Tell us what you think you’ve done wrong in the past.

I’ve gone through a couple of red lights? [Laughs.]


You and actor Park Joong-hoon announced in 1997 that actors’ salaries are way too inflated and declared that you would be paid within a project’s production budget. Why did you say that?

Some people probably thought it was a stupid idea because we’re all living in a capitalist country, but it was hard for me to imagine filling my pockets when others were having hard times.


Aside from being an actor, you’ve played many roles. You belong to many film-related organizations as a judge and director, including the Asiana International Short Film Festival, the state-run Good Downloader Campaign and the Korean Film Archive. In addition to that, you’ve been working as a goodwill ambassador for the Korean Committee for Unicef for the past 19 years. Does that mean you’re the type of person who can’t say no?

I have to attend about 20 events a year because of my many responsibilities. I always sigh whenever I hang up the phone and think, “I should’ve said no.” I can say no to films that I don’t want to do, but it’s hard to refuse a personal request. I keep thinking “What if the person is disappointed when I say no?” I do have my rules, though. I don’t do jurae [officiating at weddings.]


Since you have so many responsibilities, it must be hard for you to focus on acting.

I used to be upset about it because I didn’t have much time to dedicate to acting. Back when I was young, I did nothing the day before a shoot. I didn’t even run or walk fast. I just did one film at a time. I need a lot of “me time” when I’m acting, just like a philosopher.

Since I’ve already accumulated so many roles, I don’t feel I could take on another even if I wanted to. But because I’m always busy, I do have a fantasy about living in seclusion. For example, I imagine I’m in a ski resort in Yongpyeong, but I’m snowed in because of a blizzard. [Laughs.]


Aside from acting, what makes you happy?

Everything I do that’s related to film is meaningful because [the organizations I work with] do a lot of charitable work [in film] as well. The same is true for my work with Unicef Korea. I’m almost like a full-time employee there. Though I’m not actually employed by them, I gain a lot from them. When you go on a trip, you pick the best and most beautiful destination, but when you go on a volunteer trip, you go to poor countries. By doing all of this, I realize I’m a person who possesses many things. You can’t pay for such lessons.


What is your least favorite task?

Giving lectures and writing columns. Whenever I’m asked to give a lecture, I start feeling sick about a month before. The hardest thing is talking to large groups of people I don’t know.


But as an actor, you often perform for large groups of strangers. How are the two situations different?

B.A. in Vietnamese from Hankuk University of Foreign Studies

Lifetime achievement award from the Korean Society of Cinematographers (2011)

Best actor of Korea, survey by the JoongAng Ilbo (1995)