Back on stage, cello in hand

Back on stage, cello in hand 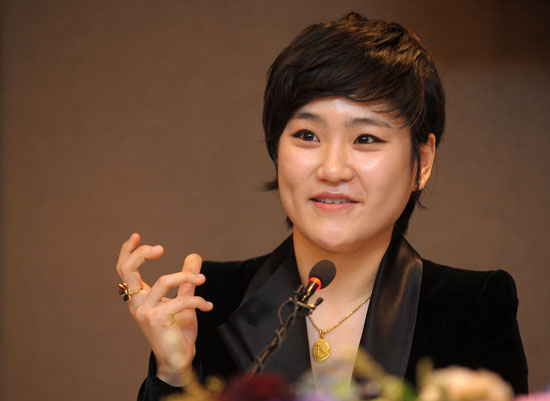 Ever since her debut as a conductor in 2007 with Korea’s first youth festival orchestra in 2007, virtuoso cellist Han-na Chang has spent more time on stage standing on the podium than sitting behind a cello.

Breaking a two-year absence from the local stage, the 29-year-old Suwon-born cellist returns for a solo recital entitled “Songs Without Words.”

At the recital, which is Thursday at the Seoul Arts Center in southern Seoul, Chang will play a more diverse repertoire than at her previous concert, where she only played Brahms. The program for the upcoming recital includes “Vocalise,” Op. 34, No. 14, and Cello Sonata in G minor, Op. 19 - both by Rachmaninov - as well as De Falla’s “Seven Spanish Folksongs” and Piazzolla’s “Le Grand Tango.”

In a discussion of why she chose each piece, Chang talked about “Vocalise,” a piece particularly beloved by classical music fans in Korea, saying, “The whole universe is compressed in the work. The agony, drama and the mind-prickling melodies .?.?. I think it is one of the greatest works of the 20th century.”

A child prodigy who won first place in the Fifth Rostropovich International Cello Competition in 1994 at age 11, besting many musicians who were double her age, Chang later graduated from Harvard with a degree in philosophy. She led the Absolute Classic Festival Orchestra, a leading group of promising young local musicians, at the Seongnam Arts Center in Gyeonggi for three years beginning in 2009.

She said the decision to play the cello and conduct came after a long deliberation about how best to share her talents while also introducing a wider audience - children and teens in particular - to classical masterpieces.

“Music is inherent in the DNA of human beings and it is a privilege given only to humans, not animals. And all music consists of songs or melodies,” Chang said at a press conference at a hotel in central Seoul on Monday. “I asked myself what I could do for an audience of people who hadn’t majored in music or people who have never learned how to play an instrument. The answer was songs.”

She named legendary American maestro Leonard Bernstein as her role model. “Bernstein is great for his unusual musical interpretations and his contribution to bringing the New York Philharmonic Orchestra to the top,” she said. “But more than anything else, his great legacy lies in the fact that he also led concerts for young people. He didn’t just seek comfort within the boundaries of classical music but persistently expanded the borders to let the general public in.”

Bernstein’s Young People’s Concerts series, which blended music and commentary, was one of the most influential music appreciation programs on television during its run from the late 1950s until the early 1970s.

“I am extremely happy being a conductor since the repertoire I can play with an orchestra is much wider than that with my cello,” said Chang, now based in New York. “For instance, Brahms composed only a few cello pieces. My view of him would’ve been much narrower if I had only played his works for the cello.”

She noted, however, that because she has now spent more time on stage conducting than playing the cello doesn’t mean she has neglected the cello, adding, “I still practice every single day under the principle that I and my instrument are a single entity.”