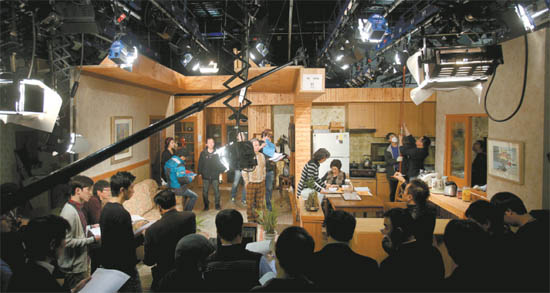 New general-programming channel JTBC kicks off its inaugural season today with a star-studded lineup of drama series, variety shows, reality shows and in-depth news programs. Pictured above is the set of the sitcom “Life in Cheongdam-dong.” By Kim Tae-sung


The launch today of four new broadcasting stations signals major changes in the nation’s broadcasting industry, with a host of dramas, variety shows and reality shows that will compete for viewer attention.

The new stations - JTBC, TV Chosun, Channel A and MBN - were authorized by the nation’s communications and broadcasting regulator about a year ago to offer general-programming content.

Before today, only three terrestrial broadcasters - KBS, MBC and SBS - were allowed to offer general programming.

As Ha suggested, the entry of the new players signals a new era in Korean television, following the Korea Communications Commission’s announcement of the four new broadcasters last December.

JTBC, launched by the JoongAng Ilbo, has already attracted a star-studded lineup of influential producers and top actors and actresses, many of whom have established long-standing careers in film and television. 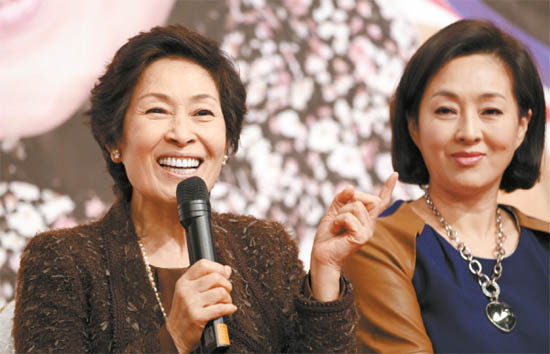 Actresses Kim Hye-ja, left, and Lee Bo-hee talk to the press last Friday about the new sitcom “Life in Cheongdam-dong,” at the JTBC studio in Sunhwa-dong, central Seoul. The show will premiere Monday on JTBC. [JoongAng Ilbo]

Kim, 70, a nationally admired actress, plays a character of the same first name in the sitcom “Life in Cheongdam-dong.” The series follows Hye-ja as she and her family move into a rundown building in the wealthy area of southern Seoul and struggle to keep pace with their well-off neighbors.

“She’s very funny yet also a bit pathetic,” Kim told the media last week. “The sitcom will give you something to think about after you watch it.”

The sitcom is directed by star producer Kim Seok-yun, who also directed the sitcom “Old Miss Diary” (2004-2005) and the film “Detective K,” which was a hit earlier this year.

“This is a story about country mice living in the richest area in Korea,” said Kim, who is one of a few directors to have achieved success in both television and film. “By spotlighting Hye-ja’s family, who want to fit in to Cheongdam-dong, I want to talk about dreams, hope and wealth from a different point of view.”

Other veteran actresses are also returning to television.

From left: JTBC offers a range of entertainment-oriented shows and drama series including “Padam Padam,” “Upper-class Life by Lee Su-geun and Kim Byung-man” and “Queen Insoo.” Provided by JTBC


Chae Si-ra will play Queen Insoo in the upcoming 50-episode period drama “Queen Insoo.” Chae previously played Queen Insoo in a different drama about a decade ago but told the media earlier this month that she decided to participate in this drama because she wanted to explore the character further.

“This drama series focuses more on the ambitious side of Queen Insoo, who dreams of becoming the absolute ruler of the Joseon Dynasty [1392-1897], and I liked the part,” said Chae.

Actress Kim Hee-ae will play the lead role in “A Wife’s Credentials,” in which an ordinary housewife who is always fretting about her children’s grades falls in love with her next door neighbor, who is a younger man. It is directed by Ahn Pan-seok of the 2007 hit medical drama “White Tower.”

Of the many drama series set to premiere on the new network, “Padam Padam” is probably the most anticipated. Featuring Jung Woo-sung (“Athena: Goddess of War,” 2011) and Han Ji-min (“Detective K,” 2011), the drama is a love story between Gang Chil (Jung), who’s been accused of murder, and Jeong Ji-na (Han). As the two fall in love, Gang finds meaning in his life.

On the surface, the series has a run-of-the-mill plot but famed television writer Noh Hee-kyung is expected to draw positive reviews from critics and viewers alike, who have praised her for her work in “The World That They Live In” (2007), “Goodbye Solo” (2006) and “More Beautiful than a Flower” (2004). The drama will be directed by Kim Kyu-tae of the 2009 hit drama “Iris.” Actor Kim Beom (“Boys Over Flowers,” 2009) plays the man who gets in the middle of the main characters’ affair.

Meanwhile, pan-Asian actor Song Il-guk, who soared to stardom with the period drama “Jumong” (2006-2007), stars in “Fermentation Family,” which revolves around a Korean restaurant.

The new network will also offer a series of variety shows.

Up-and-coming comedians Lee Su-geun and Kim Byung-man pair up in the Saturday variety show “Upper-class Life by Lee Su-geun and Kim Byung-man.” The show solicits donations from viewers every week, be it boxer shorts or a bow tie, and the duo wears or uses the item in sketches satirizing the upper class. Viewer participation is a crucial part of the show. To send an item, call 1661-3645 or visit www.vvvvip.co.kr.

The network also offers its share of star-powered reality programming.

K-pop group Girls’ Generation mentor troubled teens in their own show, “Girls’ Generation and Dangerous Boys.” The nine members of the group provide advice to help their charges turn their lives around.

The reality audition show “Made in U” distinguishes itself from its competition with its $1 million prize - which will be the highest award on television. It’s double the prize offered on the third season of “Super Star K,” which made history for being the biggest cash award at the time. The “Made in U” prize is even higher than that of “American Idol,” which offers winners a chance to sign a deal with a major record company, and “Britain’s Got Talent,” which awards about 100,000 pounds ($150,000) to the winner. The show’s producers say that “Made in U” is dedicated to recruiting and nurturing talented individuals who can appeal to a global audience.

JTBC will also offer a range of current affairs programming. Its daily news show will air at 10 p.m. from Mondays to Fridays. Rather than focusing on short news briefs, the show, JTBC News 10, will offer in-depth analysis of daily issues.

With the launch of the new network today, JTBC returns to its roots. It was founded 47 years ago as the Tongyang Broadcasting Company, which was the JoongAng Ilbo’s TV station and the country’s first private broadcaster. The station produced hit dramas and legendary programs such as “Show Show Show” back in the 1960s and 70s, but was forced to consolidate with KBS in 1980 under the military regime as a way to diminish the power of the press.

With the media reform bill that was passed by the National Assembly in July 2009 allowing private companies to operate both television and newspaper businesses, the JoongAng Media Network, the operator of JTBC, vied for a license to operate a new general-programming TV channel. It received the highest score in the evaluation scheme used by the Korea Communications Commission with 850.79 points out of 1,000 about a year ago.

JTBC was recently given the designation of channel No. 15 by the Korea Digital Media Industry Association.