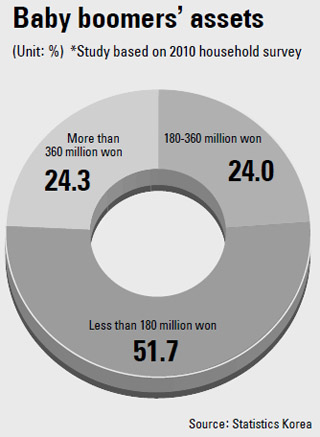 A looming concern for the future growth of the domestic economy is the pending retirement of large numbers of baby boomers in their late 40s and 50s.

But more alarming is the question of how these baby boomers are going to support themselves after they retire, and the implications of this burden being transferred to society as a whole.

A recent study showed that only 24 percent of this demographic have secured the minimum financial requirements to see them through their golden years.

Moreover, since many of their personal holdings are concentrated in real estate and financial products with low returns, they are expected to face liquidity crunches within the next three to 10 years.

KB Financial Group’s research department released a study yesterday estimating that the minimum capital needed by those born between 1955 and 1963 after they retire is around 360 million won ($316,000).

This is based on the assumption that they retire at 55, live for an extra 27.6 years and spend 1.48 million won a month on average. However, only 24.3 percent of baby boomers were found to have assets of at least 360 million won.

Furthermore, 51.7 percent were exposed to greater risks since their assets were less than half of this amount.

The study added that the ideal level of capital needed for life after retirement was 540 million won, which would provide monthly living expenses of 2.25 million won. It added that when factoring in children’s education and marriage costs, an additional 130 million won was needed.

The study noted that baby boomers have invested too much in real estate and safe financial assets with low returns, such as long-term deposits and insurance, to set up themselves up comfortably after they stop working.

The average fortune owned by baby boomers was 340 million won, of which 260 million won derives from real estate. This calculation takes into account their pension schemes.

But owning property was presented in the report as a double-edged sword, as it generally leaves them better provided for in older age but also brings with it the threat of liquidity shortages.

In contrast, those who were less financially secure were found to have invested heavily in safer financial products.

As over 60 percent of baby boomers are in debt, mostly in the form of mortgages, these monthly repayments are likely to shrink their disposable income once they retire.