Brokerages not out of the woods yet

Brokerages not out of the woods yet 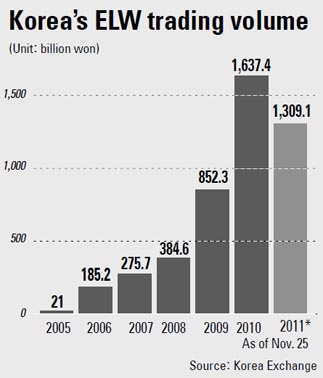 After scoring a provisional victory this week, the CEOs of 12 local securities brokerages that are believed to have given scalpers unfair trading advantages nervously await their fates as the Korean legal system continues to process their cases.

The beleaguered executives were given cause for optimism on Monday when the Seoul Central District Court handed down a “not guilty” verdict on Daishin Securities CEO Ro Chung-nam - prompting Ro and Hwang Kun-ho, head of the Korea Financial Investment Association, to hug fiercely in celebration.

As the first of the 12 cases to be tried, the highly anticipated hearing led the local securities investment sector to heave a collective sigh of relief, seeing this as a sign of things to come and raising the prospect of all the CEOs being ultimately let off the hook.

But prosecutors announced on the following day their plan to appeal the ruling, meaning the cases could become drawn out and take several years to conclude.

Like the rest of his peers now under the spotlight, Ro stands accused of having provided scalpers, or in-and-out traders that deal in equity-linked warrants (ELWs) with an unfair advantage over regular investors by providing direct use of the brokerages’ dedicated phone lines.

But despite the court squashing the charge earlier this week, some observers say it is too early to celebrate as each brokerage’s case differs and the threat of higher courts overturning “not guilty” verdicts remains a distinct possibility. Among industry insiders, the length of the trial process, which could last two to three years on appeal, is just as unnerving as the possibility of an overturned verdict.

“Each judge’s interpretation can differ, and first rulings have often been overturned on appeal,” said the head of an investment company. “There will continue to be a vacuum in [brokerages’] operations due to the trials.”

Since the so-called “scalper” trials began, the 12 CEOs of major brokerages such as Samsung Securities and Hyundai Securities have been banned from traveling abroad for business and are loath to pursue aggressive business plans.

The major issues under dispute in the scalper cases, as outlined by the court, were whether the brokerages’ provision of dedicated lines to scalpers trading in ELWs was unlawful, and whether scalpers’ split-second advantage in trading caused losses for run-of-the-mill investors.

Although prosecutors argued yes on both counts, the court rebuffed them by saying that the dedicated lines were “a service for customers with high revenue contributions” and did not cause retail investors’ losses.

However, the way scalpers connected to the dedicated lines provided by the remaining 11 securities brokerages differs from Daishin Securities’ system on a case-by-case basis.

Moreover, prosecutors suspect that some of the other brokerages favored scalpers in other ways, such as employing them under false pretenses or giving them kickbacks out of the brokerages’ handling fees.

Korea’s financial regulators have responded to the increased criticism of the massive losses sustained by retail investors in ELW trading by tightening regulations, such as requiring a 15 million won ($13,100) deposit to trade equity-linked warrants and reviewing an increase in handling fees.

ELW trading in the country reached 1.31 trillion won ($1.15 billion won) as of Nov. 25, according to the Korea Exchange. This represents a decrease of over 20 percent from last year’s annual trading record, which stood at 1.64 trillion won. The number of listed ELWs has also shrunk by more than 1,000 this year to just 8,016.

Experts in the securities investment sector noted how Monday’s ruling said that “the problems in the ELW market should be solved by policies and regulations after financial regulators have fully reviewed the issue.”

“If it had been a ‘guilty’ verdict, the impact on the market would have been severe,” said Choi Chang-gyu, an analyst at Woori Investment & Securities.