LG Electronics trims the fat in bid to speed up

LG Electronics trims the fat in bid to speed up 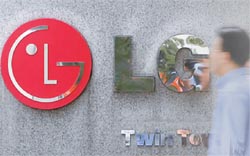 LG Electronics, the world’s No. 2 maker of flat-screen televisions and No. 3 maker of mobile phones, announced its annual reshuffle of executives yesterday.

This comes as the first major shake up of personnel since Koo Bon-joon, a founding family member of LG Group, became the new CEO in October of last year. The latest move is seen as trimming the fat to speed up decision making and make the company more competitive.

Its mobile communications sector has been losing money for six straight quarters due, in part, to its late entry into the smartphone business, and Koo has consistently stressed the need for speed in a bid to address this deficit. The electronics giant swung to a net loss of 413.9 billion won ($362.2 million) in the quarter ending in September as it failed to turn its mobile business around. To make matters worse, global credit rating agencies recently downgraded their outlook on the company, citing its weak mobile business sector.

The group signaled its intention to tidy up its operations by abolishing six of eight overseas regional heads’ positions at LG Electronics, meaning that country directors will now report directly to Koo.

“We are only keeping in place the regional posts for Europe and the Middle East/Africa because of the unique nature of those regions,” LG said in a statement.

The company also merged similar or overlapping units to cut costs and save time. One of these moves saw the monitor and printer units, which fall under the company’s home entertainment division, merged into an IT unit.

“With the aid of a faster and stronger organizational structure, we hope to raise our product quality and recover our market status,” an LG official told Yonhap News Agency. 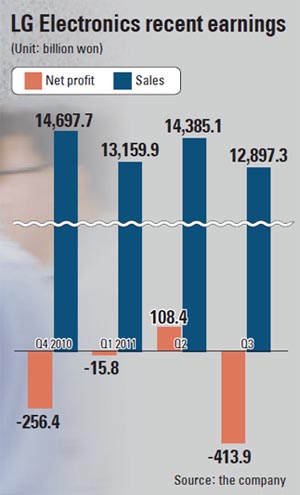 Product quality is also something that Koo has been underscoring.

“We have veered away from the fundamentals [such as R&D and quality],” he told reporters in January, his only press conference since taking over the helm.

Meanwhile, the company said it will create a new post of chief operating officer to ensure that the call for higher quality products filters down to every level of the company’s operations, from production to supply-chain management and customer service.

“In particular, we hope to see far greater efficiency in production and procurement, which will eventually drive up the competitiveness of our products,” LG said.

Contrary to market expectations that LG Electronics would cull executives in response to its disappointing earnings, the company promoted 43 executives yesterday, up 10 percent from last year’s 39.

Critics say that as the morale of workers at the company is at an all-time low, fed by news of disappointing earnings and the threat of credit downgrades, Koo is trying to show how he still believes in them.

“Despite posting losses last year, Koo issued an average pay rise of 5.8 percent in an attempt to encourage employees,” an LG official told the JoongAng Ilbo.

Particularly notable is the decision to move Havis Kwon, the executive vice president of LG Electronics’ home entertainment division, up to president in light of the healthy results posted in the company’s TV business. Kwon was the only executive named to such a high-level post in this year’s shake-up.

Under Kwon’s leadership, LG launched 3-D TVs with film-type patterned retarder technology to facilitate the use of a certain type of viewing glasses and waged an intense marketing battle against its bigger rival, Samsung Electronics.

The company also promoted five executives in its mobile communications division. Observers say LG may see a change in fortunes with the advent of fourth-generation, long-term evolution (LTE) phones. LG has already sold over 200,000 units of its Optimus LTE in Korea.