Increasing numbers of convenience stores in Korea are baking bread in-store and offering freshly baked products up to 50 percent cheaper than at bakery chain giants. 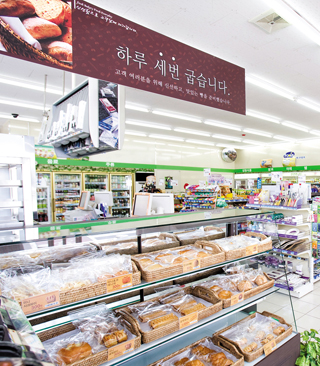 Family Mart, the No.1 convenience store in the country by market share, currently has bakery outlets at 1,400 of its 6,400 stores, selling 50 different kinds of baked goods.

“More stores are converting over because they can reap higher profits,” said An Nang-kyun, a public relations official at Family Mart.

“Customers who buy bread also purchase other items including milk. Monthly sales of convenience stores with bakeries are 20 percent to 30 percent higher than those without.”

According to An, the number of Family Mart’s convenience stores that have made the switch rose 75 percent from last year.

But industry sources point out that it is not just the cheaper prices that are pulling in customers but also the quality and taste of the bread.

“To keep the taste of the baked goods consistent in every store, Chosun Hotel Bakery provides us with frozen raw dough every day, and store owners bake it based on the training they received from the hotel’s bakers,” said Kim Si-jae, a public relations representative at GS25.

“We chose Chosun Hotel Bakery to emphasize to customers that they can get high-end bread at cheaper prices without going to bakery chains.”

GS25, which first introduced the idea back in 2005, said it benchmarked the business model of Japanese convenience stores that bake fresh buns and bread using in-store ovens.

Meanwhile, 7-Eleven said it gets its raw materials from Lotte Boulangerie, a high-end bakery brand run by Lotte Group. The baked products sell for 800 won to 1,500 won, making them 20 percent to 50 percent more competitive than rival bakery chains. The company has even developed a how-to manual for baking for its employees.

Family Mart said that while its store owners also receive training from midsized bakeries, its strategy is unique in that it compels owners of stores with bakeries to acquire professional baker’s licenses.

Industry sources said that convenience stores have found a pricing advantage that could give them an upper hand in the market.

“Unlike bakery chains, which have to pay royalties to [the brands that supply them], convenience stores with bakeries attached can keep their prices lower because they bake their bread themselves,” said Kim of GS25.

Representatives from some of the stores claim that this is the best way to boost their presence in areas with small populations due to the lack of direct competition.

Family Mart added baked goods at one of its stores in Judeok-myeon, North Chungcheong, last year and saw monthly sales rise by 20 percent, the company said.