Posco learns the Korean way is not the Indian way

Posco learns the Korean way is not the Indian way 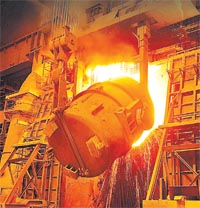 A handful of employees from Posco-India sat on a flight heading from New Delhi to Orissa yesterday hoping that on this trip the Korean company’s plan for a steel production line in the eastern Indian state, blocked for six years by land acquisition woes, would make some progress.

Korea’s leading steel manufacturer is hoping that the memorandum of understanding signed with the Orissa government, which expired in June 2010, will be renewed this month.

“There have been some recognizable changes, giving us a positive signal that some tribal people in opposition would change their stance,” a senior executive at Posco-India said.

The official said the fierce opposition publicized recently in the press is from a small number of tribal communities in the state. The official said the opponents of Posco’s plant are people who make a lot of money, relative to the average Indian, growing tobacco on the disputed site.

Six years ago, the Korean steel maker was hoping to ride the economic boom in India by making steel in Orissa.

And even though India’s growth has slowed, it is still considered one of the world’s most promising markets for steel.

India is the world’s ninth largest economy by gross domestic product and the fourth largest in terms of purchasing power parity. 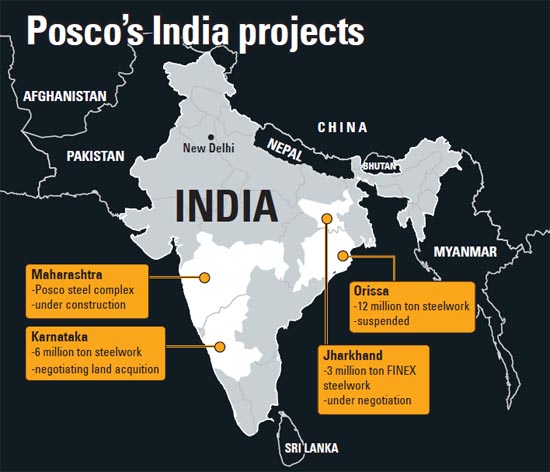 Although the Organization for Economic Cooperation and Development projected India’s economic growth for this year at 7.7 percent, which is lower than last year’s 9.9 percent, India is still one of the fastest growing countries.

From its initial signing of an agreement with the Orissa government in 2005, Posco has learned a lesson in expanding overseas the hard way.

Analysts say Korean companies operate abroad the way they do at home: the ppali-ppali way, or with breakneck speed. But sometimes that means they enter a market before learning its customs and culture.

What Posco failed to study when it went to India was a concept called Swaraj, which means self-governance or self-rule. Swaraj was an attack on British imperialism and was the basis of the Quit India movement against Britain that led to independence in 1949. And although India has opened its economy up since 1991, Swaraj is still a strong idea, and it includes strong elements of xenophobia.

In 2005, Posco and the government of Orissa signed an MOU to build a 12 million ton steel works and port in the Jagatisnghpur district.

At the time, the Orissa government was criticized in the Indian press for giving too much away to the Korean company. Posco was promised a mining lease for a total of 600 million tons of ore for three decades and possibly an additional two decades. It was also allowed to export 200 million tons of ore to Korea. The Posco steel works were going to be granted a privileged Special Economic Zone status. Posco’s planned $12 billion investment was the largest direct foreign investment in India’s history.

Then tribal people living in the Jagatisnghpur district objected to the building of the works on their traditional turf. They made their objections to the Korean company’s plans public.

“Tribal people living on the Khandadhar hills where Posco wanted to build a steel mill grow medicinal plants, and that’s the way they make their living,” a Korean official at a nongovernmental organization, Gram Vikas, said. “What they wanted was to be left alone. Posco promised them temporary jobs after the completion of the mill, but they think raising herbs to make ends meet is enough.” 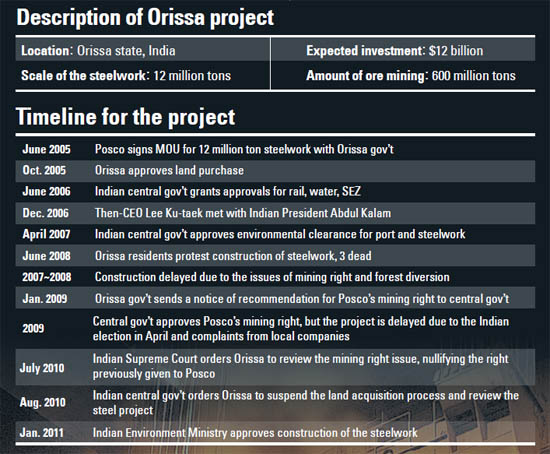 Posco finally won approval for the land acquisition from the Ministry of Environment and Forests in January 2011, and it hoped the worst delays was behind it.

But that summer, two out of seven hamlets that were to be relocated, with a total of 220 households, refused to vacate their land. It turned out that India’s Forest Rights Act stipulates that tribes living on state-owned land cannot be forced to move if they have been living on the land for more than 75 years.

Due to the problems, Posco has only completed the acquisition of half of the 4,004 acres it needs.

The Orissa government has signed MOUs with more than 40 companies for development, according the Indian press. The state is rich in natural resources including iron ore and copper.

In January 2006, 12 tribal people were shot by police in a village called Kalinganagar in the eastern part of Orissa. They were among hundreds of people protesting the construction of a facility by Tata Steel, the largest steel company in India. After the deaths, the Indian press said the Posco investment was a major trigger of the protests against land acquisition for industrial projects. “India has a highly developed grass-roots democracy,” said Jeong Chae-seong, professor of Indian studies at Hankuk University of Foreign Studies. “The country has a long history of civic movements.”

In the 1970s, the Chipko movement arose in a Himalayan region, in which tribes protested against logging on their traditional turf, and it spread to other parts of India, Jeong said. The Indian civic movement reached a recent peak during the battle over the building of a dam on the Narmada River in Gujarat state. Although the dam was built, protestors delayed the project for over 30 years.

“If they’re unlucky, Posco’s project could become the second Narmada dam issue,” Jeong said. “Because the Indian people have learned from previous big civic movements that they have power to delay such projects, they might think they can exercise more power in the next case.”

“And since Posco is known as a foreign company, especially due to the fact that it’s the largest investor ever, the backlash from people might get stronger,” he said. “Indian politicians are very conscious of their voters. This is Indian democracy. The government and business class dread the people.”

Posco has been making all-out efforts to obtain some tangible achievements on the project this year. In July, the company named executive director Yoon Yong-won as the new head of Posco-India. Yoon is the second senior executive to be sent as the head of an overseas branch in the company’s history.

“We learned a lesson from the India project,” an official at Posco-India said. “In the initial stage, we were overly impatient to start up. But we learned that the Indian system is different from ours.”

There are four major Posco projects going on or planned in India. Unlike the Orissa project, a project in Karnataka state has apparently proceeded smoothly, winning 85 percent consent from owners of land on the site of the project. Under the law, a business project can proceed after getting 70 percent consent.

“However, the Orissa project is particularly crucial in the entire India project, because it includes mining ore,” the official said.