SK maps out how Koreans use mobile data

SK maps out how Koreans use mobile data 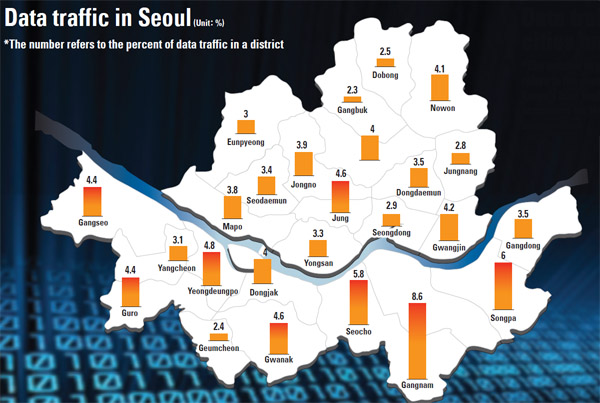 Gangnam, Seocho and Songpa - the wealthy districts in southern Seoul - are quite “generous,” while Jongno and Yongsan - two of the most expensive areas in northern Seoul - were rather “stingy.”

We’re talking about how much data people consume on their mobile devices.

SK Telecom, Korea’s No.1 mobile carrier with more than half of the mobile market, recently shared with the JoongAng Ilbo an analysis of data usage of its 26.5 million mobile users by region. It is Korea’s first data usage map, and thus, a valuable insight for both the mobile industries and related fields.

According to the analysis, the 10 million smartphone users in Korea use about 300 terabytes of data every day. That is tantamount to downloading 300,000 high-definition video files, assuming that each is about 1 gigabyte. 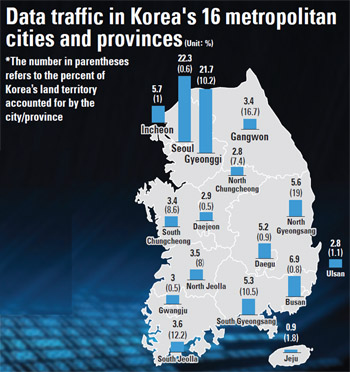 Seoul, whose land accounts for less than one percent of Korea, was responsible for more than 22.3 percent of the country’s data traffic. But within Seoul, the data-rich and data-poor areas were evident.

While there’s been a lot of talk of the surge in data usage and network overload, there hasn’t really been a detailed picture of data usage by region up until now.

Such analyses should help Korean mobile carriers in the future, especially as they are rush into the era of faster fourth-generation (4G) wireless technology.

The three areas in southern Seoul - Gangnam, Seocho, and Songpa - were the most data hungry with their mobile devices.

“Gangnam has one of the best mobile infrastructures,” Kwon Hyeok-sang, the head of SK Telecom’s network division, explained. “Plus, most of the floating population in those areas is young - in their 20s and 30s.”

Also intriguing was how Gangseo, Gwangjin and Nowon - where real estate is much cheaper than in most southern Seoul areas - made the top ten.

Many brand new apartment complexes are being built there, with just-married couples moving in.

“As the number of smartphone users broke the 20 million mark recently, mobile carriers are spending trillions of won building networks,” Kwon said. “Initially, we conducted this analysis to see how we should prioritize our investments, and it turned out to be important to see the movement and patterns of mobile device users.”

Looking at the entire country, Seoul and nearby metropolitan areas - namely, Gyeonggi and Incheon - accounted for almost half of the data usage at 49.7 percent.

Among other metropolitan areas, the port city of Busan was the heaviest data user at 6.9 percent, followed by North Gyeongsang, South Gyeongsang and Daegu.

Mobile carriers are focused on boosting network infrastructure in Seoul and adjacent metropolitan areas. In some areas there, SK Telecom says, the data transfer speed can be up to twice as fast than in other areas.

According to the “2011 Internet Usage Pattern Report” released this week by the Korea Communications Commission and Korea Internet & Security Agency, just over four out of every ten Korean households - or 42.9 percent - were found to have a mobile device like a smartphone. That is about nine times the 4.9 percent figure tallied a year ago.